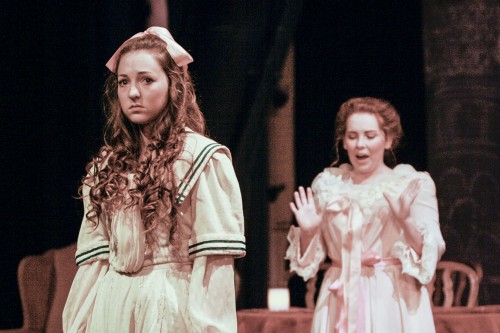 In Dailey Theatre’s production of “Three Sisters” by Anton Chekhov, controlling sister-in-law Natasha, played by senior theater major Emily Jardel, is oblivious to the youngest sister Irina, freshman Kristen Lungstrum, who has been encountered by Solyony, junior theater major Steven Forns. Solyony admitted his love for Irina and threatened to kill his rivals for her. The play, directed by Steven Kent, runs through Sunday. / photo by Autumn Simon

The theater department’s production of “Three Sisters,” by Anton Chekhov, is an adaptation of a 20th century Russian classic that began its run Tuesday.

“(The play) is about people and their situations, and wanting something bigger or more,” said senior theater major Emily Jardel, who plays Natasha in the production, which runs through Sunday in the Dailey Theatre.

The play has several main characters central to its plot.

“They rarely seem to be in their own present — always reliving the past and yearning for a better future,” Steven Kent wrote in his director’s notes. “Anton Chekhov’s plays are some of the world’s great works of theater.”

The play details the lives of a Russian family, specifically three sisters.

The family matriarch Olga, played by senior theater major Destiny Guillory, is a schoolteacher and a mother figure to her two younger sisters.

Masha, played by junior theater major Makenna Zambrano, is the middle sister, who is married to Kulygin, played by freshman theater and communications major Dan Jerz, but she begins a torrid love affair with another man.

At the beginning of the play, the youngest sister Irina, played by freshman Kristen Lungstrum, is joyful and optimistic, but over the course of the show, her outlook on life changes dramatically.

Andrey, played by junior theater major Wayne Keller III, is the brother of the three sisters. And much like Irina, his optimistic view on life is slowly torn down over time.

Natasha, Andrey’s wife, is “ambitious, and she knows what she wants, and gets it,” Jardel said.

The production was adapted and directed by Kent, director of theater, who spent years developing and editing the play so that it would be better understood in a modern setting.

“This is usually a four-and-a-half-hour play, so editing it was a tremendous issue,” Kent said. “There’s (usually) a lot more philosophizing, people musing about their lives and how weary they are.

“The concerns of the characters and the issues they face feel as contemporary and as urgent as they were over 100 years ago,” Kent added.

“Three Sisters” has many different themes, such as love, betrayal and the meaning of life.

Senior criminology major Veronika Trujillo, said she liked watching the characters realize that it was okay to not be perfect.

“I’d definitely watch it again, and I’d recommend it to anybody,” Trujillo said.

Sophomore psychology major Mari Perez said her favorite element of the play was the costumes, which are the work of professional costume designer Maro Parian.

“I’m very proud of (the actors),” Kent said. “Their engagement was remarkable.”

“Three Sisters” runs through Sunday at Dailey Theatre, with show times at 7:30 p.m. Friday and Saturday, and 2 p.m. Sunday.