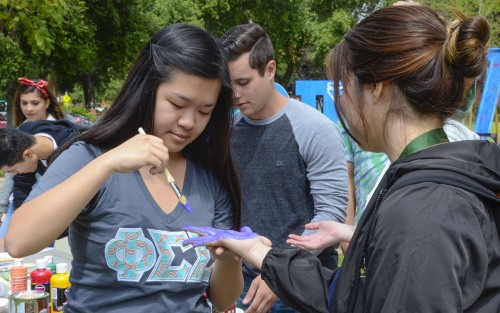 “I got involved in Denim Day last year with the Greek organizations, but I wanted to do it again because I think it’s such an important issue and I really want to raise awareness for sexual assault and its prevention,” Cendejas said.

One in five college women can expect to be sexually assaulted during her college years, according the U.S. Justice Department.

April is sexual assault awareness month. And Denim Day is an international yearly event for which people are encouraged to wear denim jeans to protest sexual assault. It is a campaign to raise awareness and to educate the public on sexual violence of all types.The movement started with a ruling by the Italian Supreme Court. In 1992 the court overturned a rape conviction stating that the survivor was wearing tight jeans and it had to be impossible for the rapist to take them off himself so the victim must have helped, implying consent.

This resulted in a huge outrage by many individuals. The women in parliament went to work the next day wearing jeans as a sign of protest and to stand in solidarity with the survivor, Jimenez said.

Since then, Denim Day has been marked as a day of remembrance for those who have survived rape and other types of sexual violence. It has also served as a way to promote awareness of these acts in an attempt to educate the people and try to stop the cycle of abuse.

“It’s become an international movement where across the world we have individuals that wear denim on Denim Day as a means to make a social statement with their fashion statement and to stand in solidarity with survivors of sexual violence all over,” Jimenez said.

They also offer counseling to any men or women who are victims of sexual abuse. Counseling for children is completely free. In addition to counseling, Project Sister offers a 24-hour hotline available to anyone that would need to talk.

Pomona also hosted their own Denim Day event Wednesday in solitude of sexual assault survivors.
Kayla Andrews, a University of La Verne alumna and Project Sister volunteer, is a survivor of sexual violence herself and works alongside Project Sister as a way to bring about awareness.

“Project Sister does Denim Day to bring awareness to all of the unfortunate events that have happened to victims,” Andrews said.

The Pomona Denim Day brought vendors from all over Pomona to educate the public on ways to stop sexual violence but also gave helpful information on healthcare, family services, child care and more.

There was also a DJ that played music throughout the event that got the crowd dancing. Raffles were distributed that allowed attendants the opportunity to win gift cards and other prizes.

Daisy Cruz, a Pomona resident, appreciated the event and said she wished there were more similar to it.

“I would definitely appreciate more events in the community like this because a lot of people don’t talk about these things,” Cruz said.

Cruz is also a survivor of sexual violence, and she never thought she’d be at an event like Denim Day because she did not know this support was out there for survivors.

“When I was younger, I was raped so this hits home for me,” she said. “I was ashamed to mention it until recently and I’m glad that all of this is here to support people like me.”

The purpose of Denim Day is to educate the public on a vicious problem and give the public not only information to stop it, but to offer survivors support as well as give them resources to cope and understand that it is not their fault.

“It helps to inform the community and support survivors such as myself. It educates everyone, kids, men and women,” Cruz said.