By Donna Martinez, Kendra Craighead on April 1, 2016 in LV Life 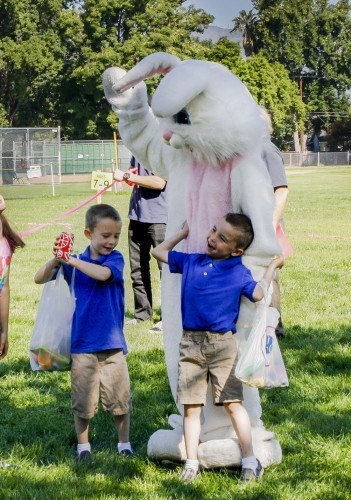 Twin brothers Jeremy and Trevor Clarke, 6, pose for a photograph with the Easter Bunny after the Easter egg hunt Saturday at Las Flores Park. Jeremy found one of the special Easter eggs and won a prize basket for the first time. His family has been participating in the event for years. / photo by Donna Martinez

The hunt was hosted by the La Verne Rotary Club, in partnership with the city of La Verne and the La Verne Chamber of Commerce.

The egg hunt was organized by age groups, with the littlest ones, ages 1-3, in their own section so they could be accompanied by a parent.

“For each age group we have three ribbons hidden inside eggs, and those three ribbons get the kids prizes,” said Steve Johnson, a longtime Rotary Club member who was on staff at the event.

Before the hunt began, some children posed for pictures with the Easter Bunny.

Then they took their desired spots at the starting lines.

In all more than 200 families in all attended the event, which Johnson noted had continued to grow over the years.

“It started with hard boiled eggs, and over the years it just got to be too messy, so now we have the plastic eggs filled with candy,” said Johnson, who handled set-up and prize giveaway.

Today the event is so popular that it is held at two La Verne parks: Las Flores and Emerald Park.

“It is an interesting event because if you are here a minute late, it’s gone,” Johnson said. “It is one of those things that you have to witness to really appreciate it.”

La Verne resident Monette Clark, a grandmother who attended the event with her daughter and grandchildren, said this was her family’s first year winning a prize.

“We’ve been coming to the event for nine years; it’s just a block away from my house,” Clark said. “It is just great to see all of the kids, even from the crying ones to the happy ones.”

Clark said her grandson Jeremy found the egg with the ribbon, adding that as soon as the hunt was over the kids were ready to go home.

Ventura resident Krista Hill, a mother of two in the 10 to 12 age group, said her husband, who grew up in La Verne, has been attending the city’s Easter egg hunt since he was a kid.

“It is a family tradition, it is so much fun for the kids, and they look forward to it every year,” Hill said. “They just love hunting eggs.”

Hill said her kids have a strategy to get the most eggs possible—by running to the back of the field first and leaving all of the eggs in the front.

When the short event ended, the crowd quickly dispersed and when all the prizes were collected, Rotary Club staff also quickly pulled up the age group signs and untied the ribbons.