By Ashlyn Hulin, Jolene Nacapuy on April 8, 2016 in Intramural, Sports 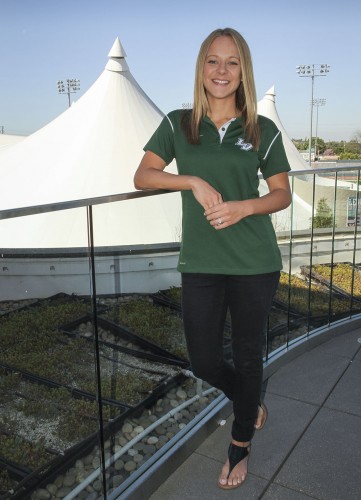 Laura Gajdosik, the new intramural sports coordinator at the University of La Verne, is responsible for planning, managing and setting up game day events. She plans to have volleyball and basketball tournaments, as well as a couple rounds of bubble soccer. / photo by Ashlyn Hulin

The hallway that once had just vending machines and trophies in the Athletics Pavilion now has a hole in the wall. From that hole shines the light of a new office for Laura Gajdosik, the intramural sports coordinator.

Gajdosik, 25, is in her first semester as the coordinator of intramurals and event management at the University of La Verne.

“I couldn’t be happier to be here. I feel so welcomed by everyone, faculty and the students,” Gajdosik said.

Her job duties include, but are not limited to, overseeing the development and operation of the intramural program, and planning, setting up, and managing all varsity game day events.

“We’re thrilled to have Laura join the University, and she brings quality experience to this position,” athletic director Julie Kline said. “She’s a proven leader in the field of intramurals and understands the importance of serving all of our students.”

Before making her way to La Verne, Gajdosik served as the recreational sports coordinator for the Claremont-Mudd-Scripps Campus Recreation program.

There she managed intramural sports, including marketing, registration and supervising the players and student employees.

“Her experience at her previous institution was part of our decision in hiring her because we appreciated her philosophy on intramurals and believed she would be able to come in and build the intramural program,” Kline said.

Gajdosik got into working as an official for intramural sports because she missed the whole sports aspect after playing varsity soccer for two years at Penn State. She then realized she could turn it into a career.

Gajdosik then switched her major from kinesiology to recreation management, and graduated from Penn State University with her bachelor’s degree in 2013. While at Penn State, Gajdosik served as an intramural sports intern.

Upon graduating from Penn State, she went on to complete a graduate assistantship at Marshall University in West Virginia for the intramurals and youth programs.

Gajdosik earned a master’s degree in sport administration at Marshall University in 2014.

That same year, she worked as a sports intern for the UCLA department of student affairs.

At La Verne, she looked at what initially had to be done here. First, she put policies into place with students and worker manuals, along with buying equipment, and finding new ways students can have their voices heard. One of her goals is to build the intramural program.

“It’s so crazy to me to see a school that doesn’t have intramurals as the top things to do if not a student-athlete,” Gajdosik said.

“It’s been a very good working relationship with her in a short period of time. She has a vision for the program that I believe will benefit the university,” Gonzalez said. “I’m excited, and it can only get better from here.”

The volleyball league is four weeks in April. The bubble soccer tournament will be a two-day tournament during the week from 6-10 p.m., and the three-for-three basketball tournament will be from 1-7 p.m. on Sunday, but it is still trial-and-error, according to Gajdosik.

When she is not planning the next event, she is exploring the city with her fiancé, working out or rooting for the U.S. women’s national soccer team, or her favorite college football team, Penn State.

But she said it is the students who motivate Gajdosik to get the job done.

“Seeing the students happy and hearing them say, ‘Oh there’s new opportunities with intramurals,’ that’s what motivates me,” she said.