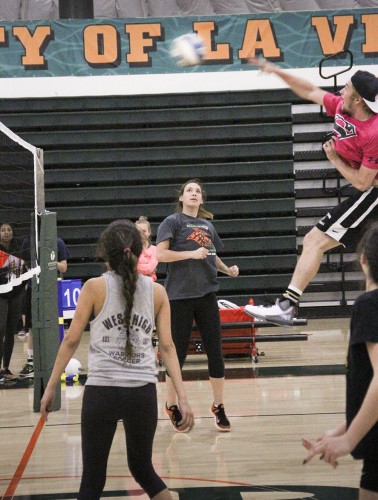 Connor Head, sophomore business administration major, hits the ball over the net for his team. The Sigma Kappa team won its game against the Goon Squad. The close game ended in overtime. / photo by Ashlyn Hulin

The University of La Verne’s intramural volleyball tournament has inspired nine co-ed student teams to set their sights on serving up friendly competition and ace their way to the finals.

“It gives those who were not allowed to join the actual team an opportunity to still show the love we have for the sport,” member of the A-Team and undeclared freshman Kyerra Green said.

There are a lot of students who have passion for sports but do not get to play because of the selection process.

“It’s good for La Verne for people who really enjoy (volleyball) but can’t play on the official team because you can’t try out for it. I don’t think we have equal opportunities for everyone on this campus to be apart of sports teams such as volleyball,” captain of the Titans and sophomore psychology major Jedaun Carter said.

The intramural volleyball season is well underway and things are starting to heat up among the nine teams.

In the second game, the A-Team and the Dirty Cheetahs played each other in a blowout with Dirty Cheetahs winning both sets, making this their second win of the season.

Even though they are on a bit of a losing streak, now at 0-3, the A-Team is still keeping their heads up and trying to have a good time. “It’s more for fun,” captain of the A-Team and freshman criminology major, Gracyn Brown said.

Brown’s team is more focused on the aspect of fun and less on competition.

“(Intramural volleyball) allows us to have fun without the major intensity,” Green said.

They are working together to be the best they can be but still making sure to have fun and bond with one another.

“We get to bond with each other and practice together. It’s not a one-person sport, I do wrong, we all do wrong. That bonding is different from competing in the classroom,” Green said.

Carter’s team, on the other hand, is thoroughly invested in the competition and at 2-0; they are in it to win it.

While intramural sports are mostly about having fun and learning good sportsmanship, her team is just as committed as any other sports team.

“We practice all the time, we have drills and everything,” Carter said.

The players are having fun and appreciate the availability of intramural sports at La Verne.

There are still 10 more games before the playoffs, and Carter is sure her team will be one of the final two.

“Yeah, there is no doubt about that,” she said.

Since Carter’s team is currently undefeated, it is likely that they will make it to the playoffs.

Almarez is also confident in her team.

Brown’s team is not really concerned with making it to playoffs; they are more in it for a good time.