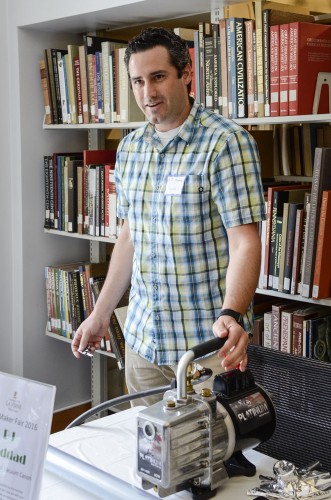 Physics lab manager BJ Haddad demonstrates his ping pong ball vacuum cannon at the Mini Maker Fair Monday in the Wilson Library. His vacuum repurposes atmospheric pressure to force the ping pong ball through a tube at around 300 mph. / photo by Emily Bieker

From crafts to 3D technology to synthetic biology, the La Verne community proved it has brilliant solutions for advancement and technology.

La Verne computer science alumnus Alvaro Alvarez showcased an interactive, tanking and dancing robot he built which combined 3D printing, an Arduino microcontroller and the technology of his cell phone.

“When I was little, I always liked robots,” Alvarez said. “I wanted a robot for my desk. I had access to the 3D printer and made the body.”

Professor of Biology and Biochemistry Jay Jones represented students and alumni for an environmentally-conscious project. By converting natural gas to methanol, the team plans to burn an eco-friendly fuel in a 2005 Prius.

“(We want to) work on a community basis to get a number of people to get their vehicles to burn methane,” Jones said.

The Wilson Library demonstrated 3D technology and allowed students to use various tools themselves, including a 3D scanner and 3D doodler.

Freshman computer science major Koppany Horvath discussed his plan to reduce electronic waste by recycling outdated technology and giving it a new purpose. Horvath connected a Commodore 64, a computer originally released in the 1980s, to the internet, allowing him to update his Twitter feed.

The fair’s main feature, a “Shark Tank” style showcase, allowed inventors to pitch their products to a panel of judges.

To win the $500 prize, inventions were required to meet La Verne’s core values and have a larger impact for the future, which would cover the cost of supplies and funding for the project’s later prospects.

Bennett and Okimura, members of the Synthetic Biology Club, presented their findings of using algae as a more environmentally-friendly fuel source.

Their project won the award for Best Exhibit.

Curran and Ortiz pitched digital signage, some of which is on display at the front desk of the Wilson Library.

Curran explained that their system of digital signage is versatile and easily customized with new content and features, including informative traffic, weather and news sections.

The show-stealers of the fair, sophomore neuroscience major Rishov Chatterjee and sophomore criminology major Rosendo Ramos, presented their version of “Watson,” a take on IBM’s technology to advance psychology.

“(The program) analyzes trigger words to diagnose what the user is probably suffering from,” Chatterjee said. “It’s like talking to a friend.”

Chatterjee explained that Watson could advance psychotherapy by allowing individuals uncomfortable with talking to an actual therapist instead talk to artificial intelligence.