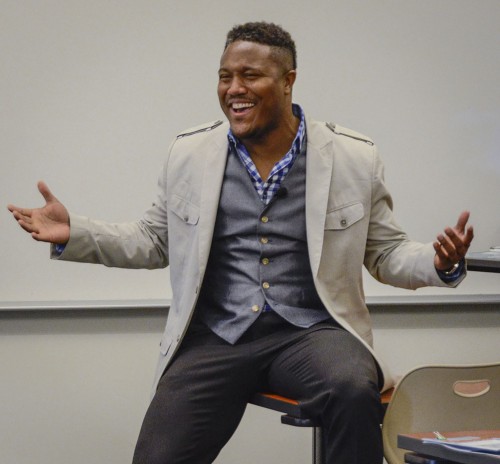 Keynote speaker Stan Pearson II talks about diversity and the issues of racism and stereotypes in our everyday lives at the All Leos Leadership Conference Sunday in the Campus Center. The conference included other educational sessions through the day. / photo by Katelyn Keeling

The Landis Leadership Scholars and Office of Student Life hosted the first All Leos Leadership Conference to enhance students’ leadership skills Sunday in various locations around the University of La Verne.

Praised for being for the students and programmed by the students, a variety of educational sessions were conducted to help La Verne students become diligent and ambitious leaders.

“The Landis Leaders and I came up with this conference to put their leadership skills to practice,” Associate Director of Student Life and Landis Leaders adviser Angie Anderson said. “We have a Greek leadership conference, but there wasn’t one for students not involved in a sorority or fraternity. A lot of the clubs were looking for some leadership opportunities so we thought this was a great opportunity to make that happen.”

Keynote speaker Stan Pearson II began the conference, making the audience at Morgan Auditorium smile from ear-to-ear. Pearson discussed the importance of self-worth and appreciating who you are and the things you do.

He also discussed different misconceptions society has about race in his own educational session in the Campus Center.

The audience was then split up into different educational sessions.

There were nine sessions split evenly into three 50-minute blocks.

Each student had the choice to attend one session per block. The Landis Leaders held a session for each of these blocks.

Nguyen and Wammack discussed the importance of prioritizing your personal life and work responsibilities.

“You come first,” Nguyen said. “Although you may have all these accomplishments, if you’re hurting it’s not worth it.”

The duo continued their workshop with an activity, where students were asked questions about themselves and colored in a “wellness wheel” according to their answers.

The purpose of this activity was to see what portion of their life they need to reconsider and improve.

Watkins, Rosenthal and Coria explained the value of respecting everyone’s voice by examining the negative impact of microaggressions.

The trio led an activity where students were encouraged to write phrases they are told and phrases they wish they heard on a post-it note.

“People will tell me ‘Wow Katie you’re a chemist’ because they’re shocked to see a woman in science,” Rosenthal said. “But I wish I heard that I was hard working.”

The purpose of this activity was to forgo the stereotypical remarks we make everyday and remind ourselves that speaking up is the only solution to resolve this.

Anchondo and Ryan began with an activity where students had to work together to figure out a path through a paper trail.

A situational leader pulls attributes from both task and trait leaders depending on the current situation of the organization.

“As the president of First Generations Club, I find it personally important to be a trait leader,” Anchondo said. “I like to get to know my members and form relationships with them.”

After the third block, all attendants gathered back at Morgan Auditorium where Pearson concluded the conference.

Although Anderson hoped that more students attended, she was still thoroughly impressed with the hard work the Landis Leadership Scholars put in and received plenty of positive feedback.

“Although the turnout was not as big, one of the ideas I have for next year is making it mandatory for club e-board members to attend the conference,” Anderson said.