By Jennifer Jackson, Katelyn Keeling on April 1, 2016 in News 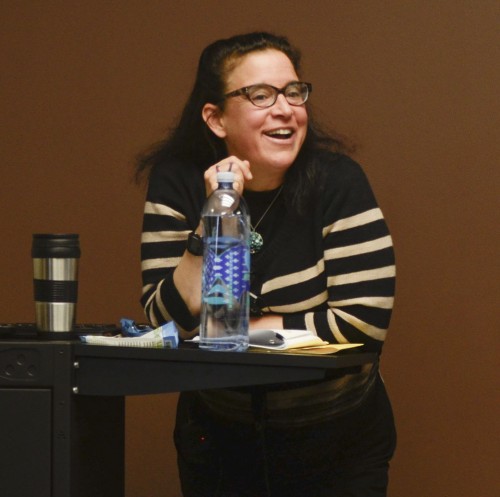 Professor of Journalism Elizabeth Zwerling speaks about the national epidemic of campus sexual assault and small steps toward a solution Tuesday in the President’s Dining Room. Zwerling discussed articles she wrote on the topic during the past two years. / photo by Katelyn Keeling

“Recent attention to this has to do with college victims-turned-activists saying ‘no more,’” Zwerling said.

The victims-turned-activists have coordinated their efforts in reporting their schools to the U.S. Department of Education, used social media to spread awareness nationally, lobbied for better laws and started an organization called EROC or End Rape on Campus, she said.

“The victims I spoke with were very candid,” Zwerling said. “They are activists, so they were already putting their story out there. The college students who started this positive movement are heroes.”

Zwerling presented statistics from the U.S. Department of Justice such as one in five American college women is sexually assaulted during her college years, and only about one in three assaults are reported.

More than 120 universities are under federal investigation for Title IX and Clery Act violations. Title IX, as Zwerling explained, prohibits gender discrimination in education, and the Clery Act calls for campus disclosure of crimes.

A 2012 Centers for Disease Control and Prevention survey found 12 percent of girls and 4.5 percent of boys in grades 9-12 reported being forced to participate in sexual activity.

Origins of the problems at the high school level include a lack of “safe relationship” and sex education, Zwerling said.

To increase education in public schools, California has expanded its “Affirmative Consent” law to include high schools; the federal government implemented the Teach Safe Relationships Act. Both laws were enacted this January.

“I haven’t been in the scenario where I have experienced it first-hand and to know it is that prevalent is scary,” Kelsey Cooper, freshman legal studies major, said. “It made me more concerned about…how people aren’t intervening.”