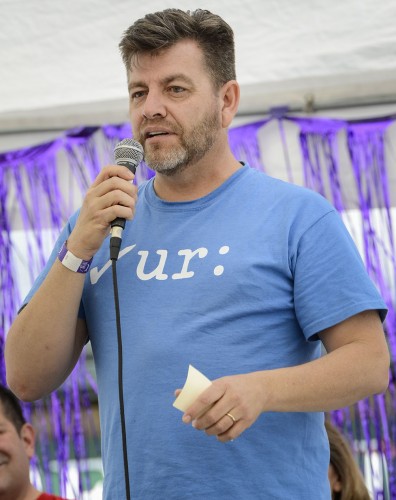 Cancer survivor Randy Lopez speaks at the opening ceremony for the Relay for Life Saturday at Campus West. The Relay for Life is a world-wide movement sponsored by the American Cancer Society. Lopez was diagnosed with stage four colon cancer in 1998. He is an activist for the Colon Cancer Coalition and produced the shirt he is wearing to spread awareness to, “check your colon.” Forty teams raised more than $42,000 in the relay. / photo by Emily Bieker

Jon Sweat, senior adjunct instructor, discussed the importance of love and respect as he revealed that he has three types of cancer: polycythemia, skin cancer and leukemia.

As a result of Sweat’s dangerously low immune system, he will resign his position in December at the University of La Verne.

Despite being plagued by this disease, Sweat spoke at Relay For Life of Claremont and La Verne at Campus West in a light-hearted tone, encouraging his audience Saturday night to stay positive in the face of adversity.

“Every day I get to walk my journey, I get to walk that thousand miles,” Sweat said. “I take those step everyday trying to be as happy and as loving as I can be.”

Sweat was one of many participants at the Relay For Life event, raising money for cancer research and recognizing those who fought, and those who are still fighting a courageous battle with various forms of the deadly disease.

Forty teams, from Greek organizations to local businesses, came together and raised more than $42,000.

Relay For Life began with a bang during the opening ceremony, where audience members were encouraged to open up the conversation and ask cancer survivors about their struggles.

As the ceremony concluded, cancer survivors participated in the survivor lap, walking around the track hand in hand.

Team Her Campus captain and sophomore psychology major Taylor Distelrath was among the crowd of cancer survivors.

“When I was six years old I was diagnosed with Acute Myeloid Leukemia and when I was eight, I relapsed, so I got a bone marrow transplant,” Distelrath said. “It’s nice seeing other survivors come together and support cancer fundraising.”

Debbie Deacy, Team Stillwell member and director of purchasing, procurement and receiving at the University, explained with a smile the value Relay For Life has in her personal and professional life.

“I had a dear friend at the University who lost a battle with brain cancer and her name was Judith Stillwell,” Deacy said. “Everybody has been touched by cancer in one way or another, so by coming together we can all kick cancer’s butt.”

Deacy and her team raised about $6,500, being one of the top teams that raised the most money to help the cause.

As the event progressed, the Lumanaria ceremony took place where Sweat opened up to his audience about how cancer has changed his perspective, values and attitude towards life.

“All the joys you bring will be brought back to you,” Sweat said. “Live your life and have respect for yourself and for others.”

“I have a good friend that survived breast cancer who’s not a blood-related family member, but I do care about her,” Hernandez said. “It does affect me emotionally, so being able to participate in Relay For Life is a great way for me to celebrate her and what she has overcome.”