By Jose Brambila, Meghan Attaway on April 1, 2016 in Sports, Tennis 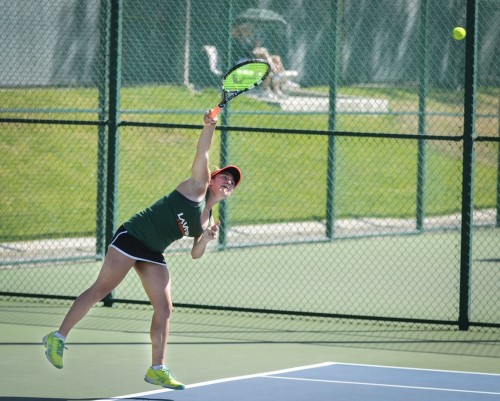 La Verne junior Bridget Etchegaray returns the ball in her doubles match against Pomona-Pitzer Saturday at the Pauley Tennis Complex in Claremont. Etchegaray and freshman partner Savanah Goode lost to the Pomona-Pitzer duo of freshman Caroline Casper and senior Lea Lynn Lea, 8-2. The Leopards were swept by the Sagehens, 9-0. / photo by Meghan Attaway

The women’s tennis team extended its losing streak to seven, after being swept by No. 19 Lewis & Clark and No. 3 Pomona-Pitzer last Friday and Saturday.

The Leopards dropped to 3-10 overall, and 1-1 in Southern California Intercollegiate Athletic conference play.

“Playing tougher opponents gives us a challenge and it will only make us better,” freshman Savanah Goode said.

In Friday’s game against No. 19 Lewis & Clark at the Claremont Club, the Leopards were bested in the doubles matches, 3-0.

La Verne hoped to come back in the singles match, but could not find an offensive rhythm, and the sweep was completed, 9-0.

It was a new day, and the Leopards hoped to put the loss behind them, but once again, were swept by No. 3 Pomona-Pitzer Saturday at Pauley Tennis Complex in Claremont.

La Verne headed into singles play down, 3-0, and the deficit proved too much for La Verne to handle.

For junior Areli Martinez, this defeat was a reminder that there is still a lot of work to be done.

“All we can do is keep working,” Martinez said. “We’re a brand new team and we need to develop our skills to work together.”

The Sagehens controlled the singles matches to put the Leopards away.

To complete the sweep of the day, Chinn fell to freshman Arianna Chen, 6-1, 6-0.

Despite the tough loss and season, Chinn still has a lot of faith in her team, and knows there are nit picks, such as the basics that the team needs to work on as a whole.

“The season has not gone the way we hoped,” Chinn said. “But all we can do is keep on working.”

La Verne is back in action in SCIAC play against Chapman at 2 p.m. Friday at the Claremont Club.