By Jose Brambila, Kathleen Arellano on April 8, 2016 in Sports, Tennis 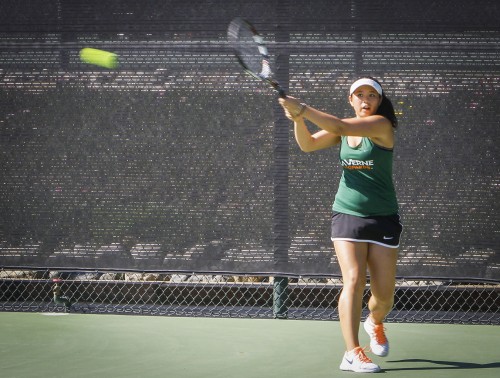 La Verne freshman Savanah Goode strikes back from a serve by Chapman junior Madeline Saunders Friday at the Claremont Club. The Leopards pounced the Panthers, 7-2. / photo by Kathleen Arellano

Unfortunately, they could not keep the win streak going and lost to No. 21 Redlands, 9-0, Saturday at the Claremont Club.

The Leopards are 4-11 overall, and 2-2 in Southern California Intercollegiate Athletic conference play.

Against Chapman, the Leopards got off to a hot start, winning the doubles matches, 2-1. La Verne dominated the singles matches, 5-1.

Junior Bridget Etchegaray dropped the only match for the Leopards.

For senior Shenelle Trujillo, the way they practice is a reflection of what is seen in the matches.

“Practice sets the tone for the matches for the week,” Trujillo said. “If we have good practices in which we are working hard, more than likely the outcome of the match is going to be a win or if not a close match.”

La Verne hoped to get a win streak going after dropping seven straight matches, but were swept by No. 21 Redlands Saturday.

The doubles sweep was finalized when La Verne freshman Savannah Fisher and Goode were bested, 8-2, by senior Gabriela Vasquez and junior Emily Murnin.

La Verne headed into singles play down, 3-0, and the deficit proved too much for La Verne to handle.

The Bulldogs controlled the singles matches to put the Leopards away, 9-0.

Goode was bageled twice in her singles match against Murnin, 6-0, 6-0. Bridget Etchegaray lost to her sister Natalie, 6-2, 6-0.

“Playing my sister was difficult, but I knew I had nothing to lose,” Bridget Etchegaray said. “So I went for it, and even though I didn’t win, it’s probably the best tennis that I have ever played in my life.”

La Verne will be back in action at Caltech at 2 p.m. Friday at the Caltech Tennis Courts.