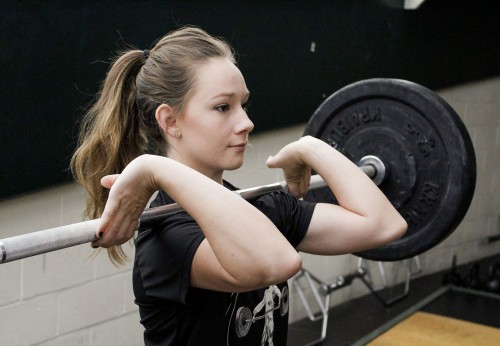 Junior Hailey McCann typically performs the snatch and the clean and jerk as she warms up for the rest of her workout. She begins with five kilograms and works her way up to her maximum of 67 kilograms. / photo by Brooke Grasso

As she finished her workout with squats, pull, clean and jerk, and snatch, Hailey McCann sat on the floor, deciding if she wanted to go to In-N-Out for a burger with animal fries or to Little Caesar’s for a deep dish pizza.

She eats so much, and yet the 5-foot tall body builder worries if it is enough to keep up with her muscular weight-lifting friends. Then another thought enters her head. If she hangs out with people other than weight lifters, does she “look grossly big and like a boy?”

McCann, a junior kinesiology major at the University of La Verne, said she sometimes wonders how she would look like if she were skinny and tall instead of “short and buff.” When she looks in the mirror, seeing her big arms and legs, she feels her body image is just right for lifting weights. However, at the same time she sometimes feels unfeminine.

“A dress that once fit me, I couldn’t zip it because my back had gotten so muscular,” McCann said. “It was so devastating to know that I’m not seen as feminine because of a masculine hobby.” 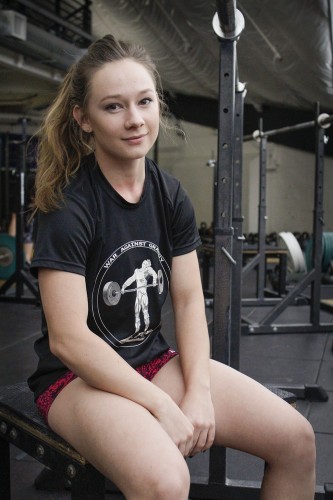 Besides weight lifting, Hailey McCann participates in the University of La Verne’s Bible study group and has been acting since she was young. Her films include “The Time Traveler’s Wife,” “Give or Take an Inch” and “The Grand.” / photo by Brooke Grasso

She lifts weights on a daily basis and with her body structure many wonder how a petite woman can lift so much.

McCann, 20, began lifting at 12 to keep up with her softball teammates because she felt they were stronger and bigger than she was. When she stopped playing softball her freshman year at La Verne,

She has been told her legs and arms are too big and a part of her wishes she could be tall and skinny.

“Someone once told me I was shaped like a chicken nugget,” McCann said. “I’m not a blob, I’m a human being.”

Kelsi Robinson, junior political science major and middle blocker for the La Verne women’s volleyball team, said she struggled with body image in middle school and high school. A model who lifts weights, was also concerned about being too muscular. Robinson loved to play volleyball growing up and wanted to stay fit. When she added modeling to the mix, she became conscious if her arms were too large.

“I had a certain image in my head of what I should look like and always thought I’d be happier if I had someone else’s body and never really appreciated my own,” Robinson said.

The images of women’s bodies that are all over fitness magazines and social media are not an accurate portrayal of how a woman looks and many go to extreme measures in trying to fit into it. This can be particularly detrimental to athletes, who need nourishment to perform at their best.

“Women who are strong, confident, athletic and can lift more than men sometimes because they do workout and they are athletes, are phenomenal,” said Kassandra Jones, senior kinesiology major, who interned at the eating disorders division of Pacifica Recovery Services in Claremont. “This should be more emphasized and not trying to be this perfect body the media wants.”

During her internship, Jones saw men and women of all ages with different types of struggles with body image.

“Giving feedback such as, ‘Wow, you look really thin today,’ or, ‘Wow, have you lost weight?’ saying stuff like that encourages someone who has been starving themselves to keep starving themselves,” Jones said, adding that it is more constructive to emphasize people’s accomplishments.

The media perpetuates the problem even in the case of world-class female athletes, whose bodies are scrutinized and disparaged if they look too muscular, or otherwise imperfect, no matter how well they perform.

Tennis superstar Serena Williams, who is ranked No. 1 in the world and said to be the greatest female tennis player of all time, has long been criticized for being too muscular. 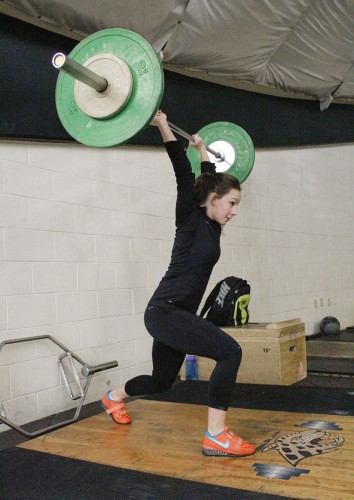 McCann snatches 50 kilograms in the weight training room where she prepares for weight lifting competitions. She participated in the St. Patrick’s Day weight lifting Championships in March, where she qualified to compete in nationals over the summer. / photo by Brooke Grasso

On the other hand, Anna Kournikova, former professional tennis player from Russia is the opposite from having a muscular physique.

Kournikova is slim and slender and her muscles are not as built. The media does not focus on her performance of not being as good, but the way she looks has gained their attention. She became one of the highest paid athletes in the world and the highest earner in women’s tennis, primarily without even lifting a racket. With her body type, she has earned endorsements of $10 million every year from sponsors including Adidas, Omega and Berlei, and became the most Googled sportswoman on the planet, according to CNN.

“(In sports) just like in modeling, thin is better, to a point, yes, but there are obviously very significant health issues associated with excessive thinness,” said Paul Alvarez, professor of kinesiology and athletic training program coordinator. “Part of the problem is that we can look at certain individuals and say, ‘Oh they’re this or the other, but the visual (assessment) can be an extremely dangerous thing.”

“All that you see on Instagram popular pages are super thin bikini models while brands like Brandy Melville have ‘one size fits all’ for all of their clothing. And the most popular fashion show for Victoria’s Secret probably hasn’t cast a runway model over size 4 since it began,” Robinson said. “The brands, social media platforms, movies and shows that women are exposed to the most are those that constantly portray close to impossible body image standards.”

Robinson said she still thinks about her body image from time-to-time. However, she does not let it get in the way of her self perception.

“Even the people whose bodies look perfect when modeling are still edited,” Robinson said. “Being muscular has only helped my volleyball career in making me stronger. Everyone’s bodies are different and being confident on your own only makes you look and feel better.”

“It’s a super-empowering feeling to know that I can do something that day that I couldn’t do the day before,” McCann said. “There’s always a part of me that cares, but I really don’t care what others think of me. I like the way I look so that’s all that really matters.”