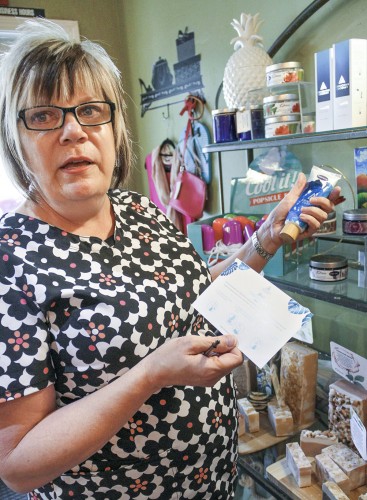 Lori J. Paley, owner of Aromatique: Skin and Body Care, participates in Fair Trade Weekend in Claremont by selling Conscious Coconut brand oil. Conscious Coconut hires people with disabilities to package the coconut oil, and each purchase provides a meal for a child in need through partnership with Feeding America food banks. Many stores in Claremont that use and sell fair trade products participated in Fair Trade Weekend May 13-15. / photo by Ashlyn Hulin

Claremont residents and visitors had a chance to become agents of change and support fair trade, enjoying special offers during the Fair Trade Weekend from May 13 to 15 in the Claremont Village.

The initiative is aimed at raising awareness and encouraging people to support the movement, which brings social and environmental responsibility to the workplace.

To be considered a fair trade business, companies must buy products from fair trade certified organizations and meet many standards, including regular audits.

The Bath Workshop on Bonita Avenue has been involved in fair trade for about five years before it became a town event. They have the certification, which ensures fair trade standards at every level of production and delivery, including buying from certified organizations, paying fair trade prices and premiums and being submitted to rigorous supply chain audits, according to Fair Trade USA.

“We were one of the first merchants to be involved in fair trade in Claremont, and we were really proactively involved in getting the certification for it, so I believe we’ve been doing it since day one,” store owner Susan Pearson said.

“People are starting to know (about fair trade), and there’s still a lot of education that needs to happen. A lot of people heard the term and they don’t know what it means, so I try to explain it and why it’s so important,” Pearson said.

She said they try to have everything locally made, but when they need something that is not produced in America – such as shea nut, only grown in Africa – they want to make sure it is fair trade for the workers involved.

“There’s a lot of people out there that take advantage of these people. It’s slave trade and horrible conditions. We don’t want to be any part of that,” Person said.

She said it is important to educate customers because some believe that supporting local businesses and fair trade go in opposite directions.

“They go hand in hand, the concept is really the same,” she said.

“It’s just that yes, I do want to buy local in that way, but when you have to go outside to get other things you want to make sure that it’s the right stuff.”

Rio de Ojas, located on Harvard Avenue, was another store participating in the Fair Trade Weekend. The store offered a variety of products including Haitian tin work, jewelry and accessories.

They also had fair products without certification, such as pillows, candles from Thailand and pottery made in Mexico with identical materials and processes to those in the Colonial period.

“I don’t know from personal experience but I do know from what I hear from vendors, sometimes they think it’s really hard to get (certification), so some of them just don’t bother,” said Terri Riljas, one of Rio de Ojas’ owners.

“I think that one of the advantages to being an owner is that you can do things that help make the world a better place, and you can choose to work with people that are doing that and support it,” Riljas said. “If we don’t make those choices, consumers can’t make those choices.”

“Once people find out what fair trade is, they like it more, so we do get a good feedback,” said Jessica Evans, who works in the store.

“If you go out on the street there is not a lot of people that know what fair trade is, which I think is honestly really sad because you’re really helping other people,” Evans said.

She said it is important to be able to support other communities in other countries so they are able to provide for their families.

Other businesses offering discounts were the Buddhamouse Emporium giving 15 percent off hand-painted candles from South Africa, the Bert & Rocky’s Cream Co. offering 50 percent off when buying one chocolate flavor ice cream, and Hendricks Pharmacy offering “buy one get one 50 percent off” on all fair trade items.