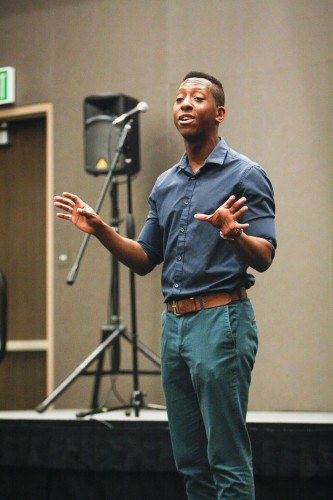 University of La Verne alumnus Myron Woods performs spoken word poetry April 28 in the Center Campus Ballroom for Art Around the World. The event, sponsored by the Campus Activities Board, celebrated international cultures by providing different kinds of food while students expressed themselves through dance, poetry and songs. / photo by Bailey Maguire

From the pungent aroma of Filipino pancit to the rich taste of French cannolis, a variety of ethnic cuisines excited the taste buds of those who attended the Campus Activities Board’s Art Around the World event April 28.

Besides the diverse range of food, the event featured student-performed speeches, songs and dance routines in the Campus Center Ballroom.

Freshman anthropology major Zimanei Slocum was one of the many student performers of the night.

“My performance was a spoken word about rape culture,” Slocum said. “I basically repeated ‘no’ over and over because when women are raped they don’t have a choice. When they say ‘no’ they aren’t respected.”

“She showed me the struggles of a culture that I’m not used to and don’t normally see,” Lee said. “Her emotional performance was incredibly moving.”

Slocum hopes that those who attended the event can understand the problems some people go through but are too afraid to say out loud.

“I have plenty of friends and family members that have been raped and it’s important to me to show people that this is a relevant issue today,” Slocum said.

Slocum found every performance significant to the need for cultural awareness at the University.

“I feel like it was an amazing event,” Slocum said. “So much talent and unheard voices. We need to have events like this monthly to defeat Eurocentrism.”

Despite the powerful representation of diversity and inclusivity embodied through the student performances, the event could not be complete without the variety of ethnic dishes.

In addition to Filipino and French cuisines, the event had an abundance of Thai, Spanish and African food for all to enjoy.

“Thai food is my absolute favorite,” Nosrati said. “I wasn’t expecting so much good food and I’m really glad I came.”

Although Lee thought all the dishes were delicious, she enjoyed the Filipino pancit the most.

“I loved the pancit because I don’t normally eat Filipino food,” Lee said.

“Through the food and the performances, I really got a taste of cultures that I’m not used (to).”