La Verne women’s soccer junior goalkeeper Heather Seaman has suffered from four concussions in her lifetime, three of which came from injuries during her time at La Verne.

None of her three recent concussions came from heading the ball. Two were from being hit in the face by the ball –  one on a close range shot while playing goalkeeper.

The third and worst happened after she dove backwards and hit the goal post while she was trying to block a shot.

“After I realized I got a concussion, I didn’t really think much of it,” Seaman said. “I thought, ‘Okay this will go away and I’ll be back in a week or so,’ like the past concussions I had. It didn’t really hit me how serious it was until my trainer pulled me out of school for two weeks, and I wasn’t allowed to drive or pretty much do anything.

“After the third one I had to see a neurologist and it made me very aware of the severity of my concussion as well as how dangerous they were, and many doctors warned me that getting anymore could be dangerous,” she said. “Going back into playing was scary and there was definitely a period of time upon returning that I was very hesitant in goal and had a major fear of getting another concussion and still today I am more aware of the situations I am in while playing.”

At a time of increased national media attention to concussions – and their potentially devastating effects, particularly on young people, senior athletic training major Margaret Ha dedicated her senior project to improving the process for La Verne students returning to their classes after suffering from a concussion.

Ha hopes to implement a Return to Learn process for athletes returning to school and regular classes after suffering from a concussion while playing a sport.

“I wanted to do this project to better support student athletes, especially at the D-III level, as education is a priority,” Ha said.

Currently the process for returning to play after suffering from a concussion is well cemented in the University’s protocols.

Students watch an NCAA video on concussions and they are given a handout at the beginning of every academic year.

Concussions are extremely serious; while some can be as simple as a minor blow to the head, others can be deadly.

Concussions are graded as mild or grade 1, moderate or grade 2, or severe or grade 3, depending on such factors as loss of consciousness, amnesia and loss of equilibrium according to WebMD. 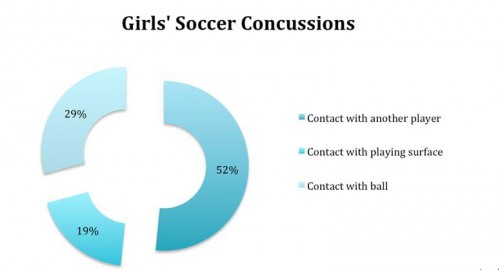 When it comes to brain injuries there are two types that are common with concussions, coup and contre-coup injuries.

Coup injuries occur when a forceful blow hits a head that is not in motion and it produces brain injury beneath the point where the cranium was impacted.

A contre-coup injury, on the other hand, occurs when a moving head hits a moving object and usually causes damage to the brain on the opposite side of where it was impacted.

In these types of situations, the force of the blow causes the brain to shift and forcefully collide into the opposite side of the skull.

If a concussion is suspected, it is reported to Athletic Training, and the athlete is immediately removed from the sport and is evaluated.

If it is deemed that the student is in fact concussed, NCAA rules state that the player cannot return to practice or a game within the same day.

La Verne, however, has a longer process that students must follow in order to return to playing. First, the Athletic Training department monitors the players until their symptoms completely subside, according to the University of La Verne Athletic Department Handbook.

The handbook also states that once the athlete has been cleared as asymptomatic, he or she is put through several tests, including ImPACT testing, a computer based cognitive test, and a written question and answer cognitive test. The results are then compared to baseline scores from when they were tested as first year athletes.

After their scores have returned to the baseline level, the athletic trainers physically test them, forcing them to exert their bodies to ensure that they stay asymptomatic.

If no symptoms are found, the athlete is allowed to return to a non-contact practice. The athlete then has to be cleared by the team physician to return to regular play as the last step according to the handbook.

While there is sort of a process for student athletes returning to learn after a concussion, a formal written protocol currently does not exist.

“I wanted to understand more about Return to Learn as it’s a fairly new topic in the sports medicine world, with most schools only now starting to implement and create a protocol,” Ha said.

“Our goal is to work together to do a research project to try to understand what student’s experiences were returning to school after having a head injury as well as trying to understand the process they went through and what’s being done at the University of La Verne,” Kasamatsu said.

In order to do so, they had to first perform a quantitative analysis of how many students suffered from concussions at the University within the past two academic years.

“The great thing was that everybody involved had a pretty general understanding of what concussion was, so we were happy to hear that,” Kasamatsu said.

They are continuing to address challenges that may or may not arise.

When dealing with symptoms of a concussion, students may experience light sensitivity, double vision and blurry vision, making it hard to concentrate in class.

Junior La Verne women’s soccer defender Julia Gomez suffered from a concussion after being hit in the head by a ball during practice in the fall semester of 2015.

“Luckily it happened on a Thursday, and when it happened I didn’t have classes on Thursdays or Fridays so I was able to take the weekend to rest,” Gomez said. “It was hard doing homework over the weekend because even though they told me not to, I thought, ‘Maybe I can,’ and then going to class, since most of them use projectors, it wasn’t the easiest to stay focused.” 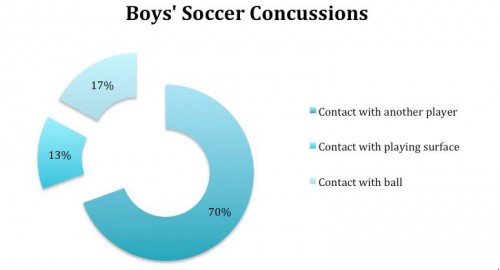 A study by Carol DeMatteo and colleagues of McMaster University published in Clinical Pediatrics looked at the impact of concussions in children and their ability to return to school.

Through this study, they were able to create a Return to School protocol for young athletes.

The protocol included five stages: brain rest, getting ready to go back, back to school or modified academics, nearly normal routines and full activation.

During the first stage, they recommend that students stay out of school for at least one week or until the child does not experience any more symptoms.

During the second stage, children are allowed to read and watch television in 15-minute increments.

In the fourth stage, students return to a nearly normal routine where they will attend full days of school for the entire week, but the child can do less than five days if needed.

The final phase of their return to school protocol involves the child returning to normal school routines, including having consistent attendance, regular completion of homework and tests and participation in extracurricular activities.

They found that a balance of both cognitive rest and timely return to school need to be considered in a protocol for returning any student to school after a concussion.

Ha’s project would recommend a similar process as that of DeMatteo and her colleagues with a gradual reintroduction to classes and schoolwork.

Recent research studies, a rash of head injuries, parental concerns and the movie concussion have all brought the issue to national light.

In an attempt to protect young soccer players, U.S. Soccer has released several initiatives that took effect in January addressing matters such as head injuries and banning headers for younger children.

According to U.S. Soccer’s Concussion Initiative, players under 11 are banned from engaging in heading, in both practices as well as games.

U.S. Soccer further recommends, for players under 13, that heading during practice and training be limited to a maximum of 30 minutes per week with no more that 15-20 headers per player, per week.

All coaches should also be instructed to teach and emphasize the importance of proper techniques for heading the ball, according to the document.

“I think (the ruling is) going to be more detrimental to players because of all my friends that have had concussions, on the team at La Verne and even in high school, the concussions weren’t from headers, they were from getting hit with the ball when they weren’t paying attention or from running into somebody else’s head,” Seaman said.

While headers may contribute to many soccer related injuries and may lead to concussions, heading the ball is not the only way to get injured or sustain a concussion during play.

Data from a study by the Journal of the American Medical Association Pediatrics indicated that player-to-player contact, 68 percent among boys and 51 percent among girls was the main factor in surveyed concussions.

Heading the ball did play a role as well, as 30 percent of concussions in boys and 25 percent among girls were caused by headers.

It is important to note, however, that these concussions were due to collisions among players, meaning that it was the actual bodily contact that brought on the concussion – and not heading the ball in and of itself.

The JAMA data showed that only 17 percent of concussions in boys and 29 percent among girls were caused by direct impact with the ball itself.

Soccer is an inherently aggressive game, so educating players about brain injuries and concussions prior to playing may be a step in the right direction, but is banning headers all together taking it one step too far?

“I feel like the ruling is going to help kids at a young age avoid concussions, but once they get older and heading the ball is allowed, they will not know the proper technique to head the ball because they would have never learned while they were younger,” Seaman said. “Then not knowing the technique will end up causing more concussions,” Seaman said.

A study by David Janda, Cynthia Bir and Angela Cheney for the The Institute for Preventative Sports Medicine and St. Joseph Mercy Hospital observed 57 soccer players between the ages of 10 and 13 to evaluate the effect of repetitive head impact due to heading.

The number of times a player’s head made contact with the ball, another player, the ground, the goal post, or any other object was monitored throughout the season.

Players were also assessed through cognitive tests such as verbal learning, digit span, verbal learning delay and a symbol digits modality test before the study period and after as well.

Throughout the course of the nine-month study, there was an average of 33.75 headers per female player and 131.78 headers per male player. Every player headed the ball at least once.

An overall analysis of the data revealed no correlation between the number of times a child headed the ball and his/her cognitive testing scores, according to the study.

A majority of concussions come from rough body contact and from collisions among players.

If coaches were to teach techniques and ways to limit rough body contact, and referees would call fouls and enforce the rules of the game more strictly it would likely result in a reduced number of concussions as well.

U.S. Soccer also made changes to modify substitution rules to allow players who may have suffered a concussion during games to be evaluated without penalty.