By Giovanna Z. Rinaldo, Jerri White on May 6, 2016 in Feature Slider, LV Life 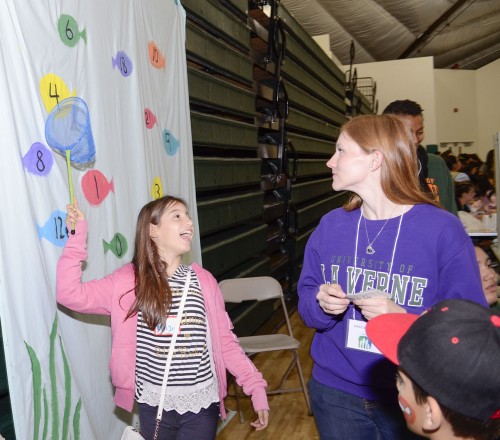 Angelina, 10, enjoys a math activity during her first time at the “Oceans of Learning.” The players used a net to catch a “fish,” which then translated to a flashcard with a math equation for the children to solve. The University’s 11th annual Family Learning Conference attracted families gathered to gain information and participate in workshops to promote hands-on learning at home. The event, scheduled for Saturday in Sneaky Park, was relocated to the Athletic Pavilion due to weather conditions. / photo by Jerri White

The rain did not stop hundreds of parents and children from gathering at the University of La Verne Saturday to promote learning in the home at the 11th annual family learning conference “Oceans of Learning.”

The event lasted from 9 a.m. to 2:30 p.m. and included several educational workshops, activities and musical performances that allowed families to have an entertaining and engaging day together.

“Our intent is to invite families to campus, especially first generation families, to experience that a college campus can be a friendly and cool place, and to support literacy and learning in the home,” said Marga Madhuri, professor of education at La Verne, who planned the conference.

“To let families know that they already have knowledge and skills that they can work with their kids to support them in being successful in school and life.”

Madhuri and Assistant Professor of Education Andy Steck worked with the Pomona Unified School District to make the conference possible.

The event was bilingual, designed to promote La Verne’s values of diversity and inclusivity.

Close to 800 people were expected to attend, but the rain might have brought this number down, Madhuri said.

“I hope they learn some skills they can use to help their children but also recognize the skills they already have,” Madhuri said.

“I think sometimes parents underestimate themselves, especially the ones that don’t speak English; they don’t think they know.”

After checking in and receiving a snack bag, families gathered at the Athletics Pavilion.

Several activities were available to keep families occupied, from drawing to making a jellyfish or a shark fin hat with colorful paper.

Children decorated a big blank paper on the wall with drawings of marine animals and several “I love this school,” “I love learning” and “I love University of La Verne” could be seen in their handwriting.

They were then separated by grade and taken to different workshops in the Landis Academic Center, the Campus Center, Founders Hall, the modular classrooms and the Athletics Pavilion.

Workshops in Spanish were held in the Hoover Building.

Serenity Martin brought her children to the event for the first time to promote reading in her family.

“I’m excited that they got to come and experience a college campus, and that they’re excited about reading,” Martin said.

She came with her son Diego, 9, and her two daughters Sophia, 8, and Jocelyn, 7.

In Founders Hall and Miller Hall, eight authors discussed their work and answered the children’s questions, which ranged from the story line and characters to the process of writing their own book.

Torrey Mahall, a Martin Luther King Jr. High School junior who wrote her book “The Search for the Golden Mission” while in 4th grade, guided children and parents through her own 21 California missions, which inspired her book.

“After I toured my first mission it just sparked my interest in visiting all the missions, and I knew I wanted to do a story about them,” Mahall said.

“I still like to write just for fun, I do a lot of poetry and short stories, but I actually want to go into business and marketing.”

The Athletics Pavilion housed lunch, authors’ book signings, a Barnes and Noble book fair and other educational activities for parents and children.

Children chose between face paint, coloring, fishing with a magnet, examining the different types of rocks and exploring their math and science interest at different tables across the pavilion.

The final activity was a musical performance by Canadian artist Rick Scott at Morgan Auditorium.

Scott played two sessions with his dulcimer, a stringed instrument, and funny sense of humor, which engaged children and parents alike.

The artist’s gestures and playful attitude made children laugh and sing along, while his performance ranged from sharing facts and stories about his homeland, Canada, to singing about classical composer Mozart in rap style and doing a musical version of the game “Simon Says.”

“In Canada, we believe that when people come together to sing, we make the world a better place,” Scott said.