By Daniel Torres, Jolene Nacapuy on May 13, 2016 in Softball, Sports 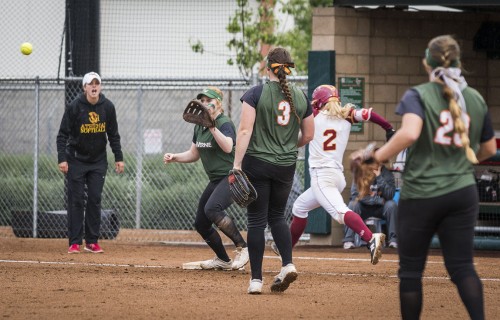 La Verne junior first baseman Alexis Schiff barely misses an opportunity to catch a base runner after a single to left field by freshman second baseman Reeve Grobecker in the winner’s bracket semifinals against Claremont-Mudd-Scripps Friday. The Leopards’ defense continued to struggle to stop the Athenas, resulting in a 10-1 loss in five innings. / photo by Daniel Torres

The sounds of shattered bats and cheers filled Campus West Friday and Saturday, as it was home to the 2016 Southern California Intercollegiate Athletic Conference Postseason Tournament.

The No. 1 seed and SCIAC Champions La Verne softball team came out swinging.

The Leopards reached the finals of the tournament with wins against the Whittier Poets, but the Claremont-Mudd-Scripps Athenas stopped them in their tracks as the only team standing in the way.

La Verne defeated Whittier, 8-0 in the first game, but fell to CMS in the winner’s bracket, 10-1.

The Leopards faced the Poets once again in the elimination game, 5-1, to advance them to the finals against the Athenas.

It was a close game, however, the Athenas came out victorious to win the tournament 4-2 and earned the SCIAC’s automatic bid to the NCAA Division III National Championship Tournament.

The Leopards waited until Monday for the NCAA Selection Show, but were not chosen, ending their season.

“I think we pretty much knew going in that if we didn’t win the tournament we weren’t going to get a bid. So it kind of hit me right after the last out that we were done.”

La Verne won its first SCIAC Championship since 2004 with a 25-3 overall record.

In the first game of the tournament Friday, La Verne went head-to-head against Whittier.

Kibbe pitched a one-hit complete game to shut out the Poets, 8-0, in five innings.

La Verne got on the board first in the bottom of the third inning with back-to-back homers.

“We were getting runners on base, but we had trouble bringing them in, so I really tried to focus on seeing the ball and hitting it hard over the fence,” Dutton said.

This was Dutton’s 10th home run of the season. She leads the SCIAC in RBIs with 48 and is second in 10 home runs.

Schiff followed with a first pitch home run to take a 3-0 lead. She finished the game 2-for-3 with an RBI.

Dutton hit a single to left field past the shift to bring home freshman center fielder Carly Condon in the bottom of the fifth inning to lead 5-0. She finished the game 2-for-3 with a home run and three RBIs.

Kibbe stepped up to the plate with bases loaded and no outs, ready to bring runners home, and the 2016 SCIAC Athlete of the Year did not disappoint.

Kibbe hit a two-run single to right field as the Leopards took a 6-0 lead.

Freshman right fielder Michelle Deguzman found the right pitch in a long battle at the plate with a hit to right field, bringing in the winning run to end the game, 8-0.

“Because of the big lead we held, I was relaxed in the box and really was only looking for a single,” Deguzman said.

Later that day, the Leopards’ win streak was broken at 15 after falling to the No. 12 ranked Claremont-Mudd-Scripps Athenas, 10-1, in five innings in the winner’s bracket semifinals.

CMS got on the board first with two runs in the bottom of the second inning.

Condon hit a solo homer to center field in the third inning to cut the deficit to one, however it would be the only run of the day for the Leopards.

“It felt really good hitting that home run because we were down by two runs and it helped fire up the team to try to score more,” Condon said.

The Athenas brought home four runs in the bottom of the third and fourth to take a 10-1 lead and the Leopards could not rally any runs in the top of the fifth, enforcing the run rule.

In the last day of the tournament Saturday, La Verne was back to face the Poets once again, but this time in an elimination game.

Kibbe got La Verne on the board with a two-out two-run homer to left field, 2-0, in the bottom of the fourth.

“It felt great getting those first couple of runs to open up the flood gates for us,” Kibbe said. “After that, I think we all felt a lot more comfortable to get the job done.”

Whittier answered back with a single down the right field line, but still trailed by one in the top of the fifth inning.

Deguzman singled to bring home senior shortstop Raeleen Tellez, 3-1 in the bottom of the fifth inning.

Tellez then hit a two-run double in the bottom of the sixth inning to extend the lead 5-1.

“It was exciting because they tried to kill our momentum by switching out their pitcher and runners were on base and yet, I felt no pressure,” Tellez said.

The Poets threatened to score in the top of the seventh with back-to-back singles, but with a double play, the Leopards came out with the victory.

It was time to bring the bats to life and come back from the loss the day before, as La Verne faced Claremont-Mudd-Scripps in the final game.

The Athenas took an early 2-0 lead.

Condon brought home La Verne’s first run of the game with an infield home run to right field in the bottom of the third inning to cut the deficit 2-1.

Freshman second baseman Reeve Grobecker threw the ball, which hit Condon on the foot and the ball went toward the right field corner.

“My coach at first was holding me up at third, but then decided to send me home,” Condon said.

Schiff then yacked her 12th home run of the season to right field in the bottom of the sixth to tie the game 2-2.

“Gurr is an amazing pitcher and has a great team behind her, so being able to hit one over was huge,” Schiff said. “You gotta take everything they give and she gave me a pitch I could hit out and went with it.”

Schiff finishes the season with 43 RBIs, second in SCIAC and first with 12 home runs.

The Athenas broke the tie with a two-out double and brought home two to take a 4-2 lead in the top of the seventh.

The Leopards had a chance to tie or take a lead in the game with bases loaded, however, with back-to-back grounders in the shift, were not able to score and the Athenas sealed the win.

“Us seniors could not have asked for a better group of underclassmen behind us. We had so much fun together on and off the field and I’ll cherish the memories and friendships for my whole life,” Kibbe said.

As the season has come to a close, the Leopards have set high hopes for the next season.

“This was an unforgettable season and the returners know what we have to do for next year,” Schiff said. “We cannot be successful unless everyone buys in to the bigger picture of a team. This season we learned that despite the small team we could achieve big things by working together as one.”

It is not exactly the ending they wanted, but what they have accomplished is all worth asking for.

“We set out goals in the beginning of the year and believed we were capable of achieving them,” Tellez said. “Everyone contributed in more ways than one and I was blessed to be a part of an amazing group of athletes.”