By Kat Simonelli, Kathleen Arellano on May 6, 2016 in Baseball, Sports 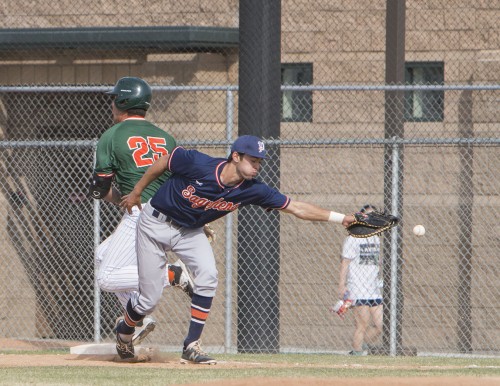 The baseball team started its round robin weekend strong, defeating Whittier 8-1 Saturday, but fell to Cal Lutheran, 6-5, Sunday and to Pomona-Pitzer, 16-12, Tuesday.

“The narrative is that we had a pretty tough second half of the season and along with that our guys showed a lot of class because they kept practicing hard and they kept trying to get better and a lot of ways we did improve,” head coach Scott Winterburn said.

Senior pitcher Javi Iniguez pitched his first complete game of the season Saturday against Whittier at Memorial Field, giving up just one run on five hits and striking out four.

“This year has been a tough year for me,” Iniguez said. “I’ve had a lot of ups and downs, I’ve struggled and I’ve succeeded. For me to pitch that game in its entirety felt really good.”

Thomas went 3-for-3 at the plate and hit a three-run home run to left field in the ninth inning, solidifying the Leopards win.

The Leopards fought hard against Cal Lutheran Sunday at Ullman Stadium, but were unable to come out on top after 11 innings of play.

The Leopards were able to come back in the top of the eleventh, after White scored on a wild pitch, but it was not enough to hold the 5-4 lead.

The Kingsmen put two more runs on the board in the bottom of the 11th to claim the win.

The Leopards were swinging for the fences against Pomona-Pitzer Tuesday at Ben Hines Field.

However, they were unable to hold their lead and fell to the Sagehens, 16-12.

La Verne freshman right fielder Chris Arcos slammed a three-run homer down the right field line, getting the Leopards on the board, 7-3.

“I didn’t try to put too much pressure on myself. I just tried to help the team in any way that I can,” Arcos said. “I got a good swing and just came out of it and the ball got put in the air and I hit a home run.”

White then hit a bomb to right center in the fourth and senior left fielder Daniel McDonnell hit a three-run home run to left field, putting the Leopards up 9-7.

“I wasn’t really thinking too much. I was down in the count, so I was already down 0-2, so I was kind of just thinking just battle up right there, just put something in play and he kind of hung a change up and I just got a barrel on it and hit it out,” McDonnell said. “I feel like if I had one way to go out it would be that way.”

White has hit a home run in all three of his last collegiate games.

“I’m just gonna go out on top as my careers over now, so last three games hitting a home run is pretty cool,” White said. “It’s a pretty good feeling, but it’s just like any other home run.”

Although the season is over, the team is not planning on taking a break from all its hard work.

“All of our guys coming back have to have a good offseason to get ready and improve,” Winterburn said. “They have to work on their game and come back with stronger bodies and stronger minds and we’ll just reload and try again.”

The team strives to raise the bar for next season and hopes to have a chance to compete for the SCIAC championship next year.