By Jolene Nacapuy, Nadira Fatah on May 6, 2016 in Feature Slider, Softball, Sports 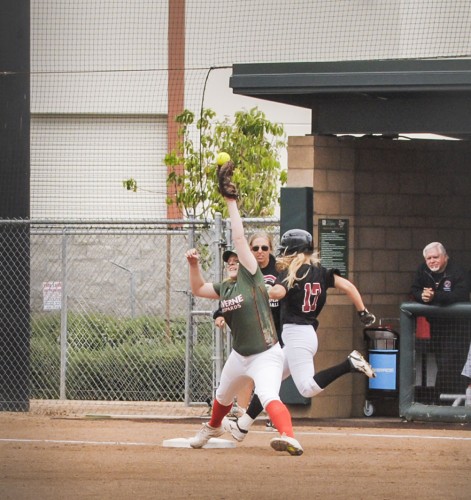 La Verne junior first baseman Alexis Schiff barely catches the ball for an out at first base in the top of the third inning against the Chapman Panthers Saturday at Campus West. The Leopards won the 2016 Southern California Intercollegiate Athletic Conference championship on senior day, 3-2, in game one of the doubleheader and 4-2 in game two. / photo by Nadira Fatah

The softball team brought out the brooms Saturday to sweep a doubleheader from the Chapman Panthers and claim the 2016 Southern California Inter­collegiate Athletic Con­ference championship.

This is the Leopards’ first SCIAC title since 2004 and they were also named Leopards of the Week.

The Leopards won the first game of the doubleheader at Campus West, 3-2, and completed the sweep with a 4-2 win in game two to extend their winning streak to 14.

“It was amazing,” junior third baseman Alexis Schiff said. “We have fought all season for this and we never let our low points take advantage of us. We fought hard to get to where we were and we were happy to reach this milestone for our program together.”

Head coach Julie Smith and her staff was also Coaching Staff of the Year.

In game one of the doubleheader Saturday, the Panthers got on the board first with a double to left center field by senior center fielder Gabrielle Leveratto to bring home two runs in the top of the second inning, 2-0.

Victoria Baltazar bringing in senior shortstop Raeleen Tellez in the bottom of the third inning.

This was Baltazar’s first home run of the season.

“It felt great and what made it more perfect was that it happened on senior day,” Baltazar said.
La Verne took the lead with a single to left field by freshman left fielder Sienna Kendricks to bring home senior third baseman Mackenzie Dutton, 3-2.

Kibbe retired consecutive batters, while striking out nine to seal the win.

“I’m glad I was able to do my job and my defense worked hard behind me and made it easy for me,” Kibbe said. “Once we had a lead, I think we all felt like we couldn’t be stopped.”

She was also named 2016 SCIAC Athlete of the Year and to the All-SCIAC First Team.

“Being named SCIAC Athlete of the Year is obviously amazing, but I could not have gotten the wins I did or put up the number I did without the backup of my incredible team, offensively and defensively,” Kibbe said. “This season, I was able to just go out and pitch, do my job, and know that my teammates were going to do theirs too. It has truly been an incredible ride.”

Dutton, Kendricks, Tellez and Schiff were also named to the All-SCIAC First Team.

The Leopards brought their momentum in game two of the doubleheader.

The Panthers once again got on the board first with two runs in the top of the first inning to take a 2-0 lead.

Kibbe then came in to pitch for senior pitcher Lyndsay Godwin.

However, La Verne took the lead in the bottom of the third.

Prior to the game, five seniors were honored – Kibbe, Baltazar, Tellez, Godwin and Dutton.

“We have all grown so close as friends and teammates that it’s gonna be tough leaving them,” Godwin said.

“We have to play like we’ve been playing all season by getting ahead and scoring runs,” Godwin said. “Whittier has never been our easiest opponent, so we need to come out ready to play with the SCIAC tournament championship and regionals in our sight.”

The winner of the tournament will clinch the SCIAC automatic bid to the NCAA Division III National Championship Tournament.

“We’ve had an amazing season,” Schiff said. “We have had to fight through everything. I wouldn’t have wanted to play with anyone else. We are ready to do whatever it takes and aren’t done yet.”