By Giovanna Z. Rinaldo, Kendra Craighead on May 13, 2016 in Feature Slider, LV Life 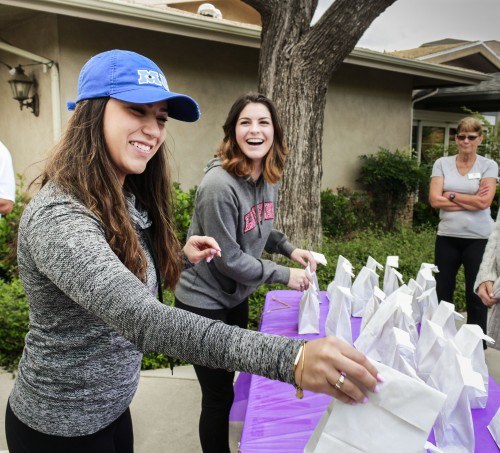 Garcia and Pallotta, who will be graduating in May, dedicated their senior project to help the cause. Since January, they have been organizing and promoting through social media and other means a walk-a-thon that happened Saturday.

The Music and Memories program, which started around two years ago, focuses on using music as means to comfort and bring memories back to residents suffering from Alzheimer’s or dementia. Donations go to purchasing iPods and new songs for the project.

Pallotta explained that family members of Hillcrest’s seniors are asked about music they listened to prior to getting diagnosed. A personalized playlist is then created, and listening to the music again might bring back a memory or simply cause positive reactions.

“It’s funny because I don’t think a lot of people think about that,” Pallotta said. “It’s really interesting how it works.”

Garcia volunteered at Hillcrest a year and a half ago as part of her community engagement. When Hillcrest’s life enrichment coordinator Loida Arriaga contacted her about the program, she did not hesitate to participate.

“I basically would go and listen to music with people who had Alzheimer’s or dementia and their reactions were seriously touching,” she said. “There were bedridden people who would not move and I would put music on them and they would come to life.”

When the time came to start thinking about senior project ideas, Garcia knew she wanted to work with Hillcrest’s program. In addition, she and Pallotta are members of the Sigma Kappa sorority, whose main philanthropy is Alzheimer’s disease research.

“I’ve grown up loving music so this is why this is so perfect for me,” Garcia said. “I seriously think music works miracles, and it really does. It’s hard to explain, but I’ve seen it first hand.”
Garcia and Pallotta managed to get a story published on the Daily Bulletin about Hillcrest’s program, as well as on the Claremont Courier. They reached out to the Church of Brethren, La Verne students, sorority members, community residents and Hillcrest seniors to help the cause.

They also set up a GoFundMe page to collect donations, as well as a $5 fee for the walk, which allowed for participation in a raffle.

“It’s nice to know I’m helping out in a good way and helping a local community instead of a really big organization,” Pallotta said. “I like that I’m giving back to the La Verne community where I go to school and a place that I’ve worked really closely with in the past, so it means a lot to me that I get to give back to them.

Arriaga hopes people understand how important music is and learn more about taking care of older adults and being a part of their lives.

“I’m excited about it, the girls did a really good job at promoting it,” she said.

“It means a lot to us because that way the program can continue growing. It’s a volunteer program and Hillcrest is a non-profit organization, so any monetary help helps the community, and helps Hillcrest be able to support the program,” Arriaga said.

She expects it to grow and benefit even more people, using music to help with other problems as well such as loneliness and anxiety. She said expanding the program can only happen with the support of the community.

Bonita High School senior Zendry Kaneski played guitar and sang live music, covering songs such as the Beatle’s “All My Loving” and singing original songs from her band Cold Culture. She volunteered with the Music and Memory program from September to October.

“I love the fact that it connects people to their memories and it lets them be who they are,” Kaneski said. “They remember stories and the stories that you hear are amazing. Also, the residents would go from being so glum to animated and full of life and it was absolutely amazing.”

The walk is over, but the program continues running and donations are still being accepted. Those willing to donate should get in touch with Arriaga via email at larriaga@livingathillcrest.org.

“It means a lot,” Garcia said. “Not only it makes me very happy that I’m able to help Hillcrest but also this is my senior project and how I’m leaving my mark when I leave.”