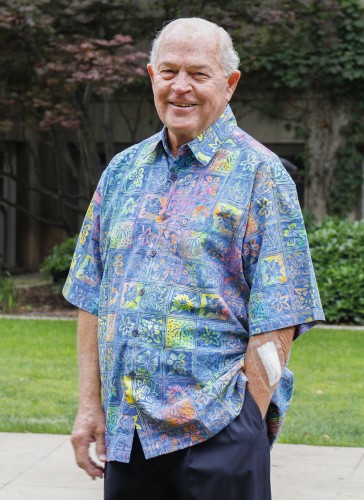 La Verne Senior Adjunct Instructor Jon Sweat will retire in December after teaching for 48 years. Sweat, also a war veteran and amateur photographer, teaches in the LaFetra College of Education. He is currently fighting three types of cancer, but he has never stopped teaching even while on chemotherapy. / photo by Kathleen Arellano

Glowing with positivity, his upbeat personality and amusing sense of humor has the ability to attract people from all walks of life.

Sweat teaches graduate courses in the LaFetra College of Education where he does field supervisions for students getting their teaching credentials.

His passion for educational studies roots from his inability to have children and two failed marriages, the first ending due to reasons beyond his control.

“My first wife turned out to be lesbian, and she ran away with a 16-year-old student,” Sweat said.

“At the time, we were both teachers at the same high school in West Covina, and she ran away with the girl she fell in love with.”

Before the end of his second marriage, Sweat’s wife broke her promise about having children together.

“Three years into our marriage, instead of having a child she got a tubal ligation,” Sweat said.

“Not having children is the largest gap in my life and in my heart.”

Around the time of his second divorce, Sweat was diagnosed with a form of blood cancer.

“The doctor was really cool. She said ‘You don’t have cancer, you have polycythemia vera’ and I was like ‘Really? What’s that?’ and then she said ‘It’s where your body has a mutant gene in your bone marrow, and you produce more blood than is necessary,’” Sweat said.

About 13 years later, Sweat was diagnosed with skin cancer, little to his surprise.

“I developed skin cancer because I’m such a beach rat,” Sweat said. “I love surfing, fishing and I would play outdoors all the time.”

However, what did come as a shock to him was his third cancer diagnosis two months ago.

“I got really sick while playing golf,” Sweat said. “By the time I got home, every bone in my body was killing me. I had a 102 degree fever for about 10 days where I lost a pound every day. My doctors did an unbelievable amount of blood tests on me and found a disease called CLL which is chronic lymphocytic leukemia.”

Because of his weak immune system, Sweat will resign from his position in December.

“Kindergarteners, first, second, third graders—I call them little germ balls because they’re always sick, they always have something wrong with them,” Sweat said. “My doctor recommended that I cut down my exposure to that kind of environment.”

Despite his third diagnosis with cancer, Sweat has maintained his usual upbeat attitude.

“I’ve always been energetic because I just enjoy life,” Sweat said. “You get one lap around the track. How long is that lap going to be? I don’t know, you don’t know. So enjoy it.”

John Gilmore, administrative aide for the educational department, has worked closely with Sweat for five years and values his lively personality.

“One of the things that cracks me up about Jon is that he is the kind of guy that will walk up to your desk, grab a whole handful of candy right out of your candy dish, stuff it in his pocket and then take a few more pieces and eat it right in front of you,” Gilmore said. “He’s wonderfully shameless, and he’s totally free to be himself.”

Gilmore remembered the time Sweat told him about his third cancer diagnosis.

“We were talking about how healthy he was and how happy he was, and then shortly after that he gave me the bad news,” Gilmore said. “The way he let me know was kind of making a joke about it, so I couldn’t tell if he was serious. He’s always been such a jokester.”

Because of Gilmore’s affiliation with Relay for Life, he asked Sweat to speak at this year’s event.

“I had very mixed emotions about doing that because his latest diagnosis was very recent,” Gilmore said.

“I wasn’t sure how he would react. I thought it could be therapeutic for him to speak out about his struggles and also to meet other people who have gone through similar situations. Luckily with Jon, that’s just what happened.”

As Sweat’s supervisor at the University, Shana Matamala enjoys his selfless and loving persona.

“Jon’s so positive that his struggles are hardly even part of his day-to-day,” Matamala said. “Even though he’s retiring, he’s not slowing down. He will always be such a big part of this University because he loves ULV students.”