By Brooke Grasso, Jose Brambila on May 6, 2016 in Sports, Tennis 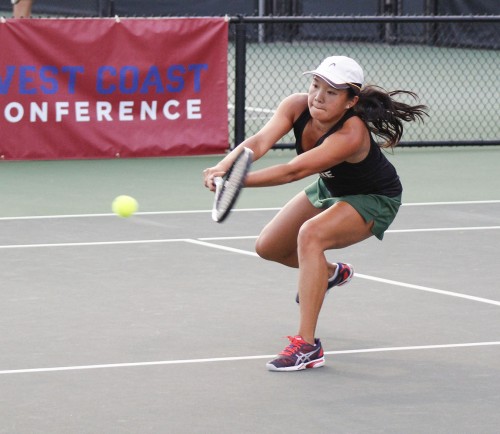 Leopard sophomore Janae Chinn hits a backhand in her first singles match against No. 4 Claremont-Mudd-Scripps April 28 at the Biszantz Family Tennis Center. La Verne was swept, 9-0, to the Athenas. / photo by Brooke Grasso

The women’s tennis team lost to No. 4 Claremont-Mudd-Scripps, 9-0, April 28 at the Biszantz Family Tennis Center. The team then snapped its three game losing streak to edge Caltech, 5-4, Saturday at the Caltech Tennis Courts.

“Beating Caltech for our last match heading into SCIACs is a great confidence booster,” junior Bridget Etchegaray said. “We have the chance to beat some of the teams we lost to.”

The Leopards are 5-13 overall and 3-4 in Southern California Intercollegiate Athletic Conference play.

In Thursday’s game, the Athenas got a quick sweep in the doubles matches

La Verne headed into singles play down, 3-0 and the Athenas controlled the singles matches to put the Leopards away.

Goode was bageled twice in her singles match against Kuosman, 6-0, 6-0.

The teams split the first two doubles matches, but Goode and Trujillo pulled out an 8-6 win over freshman Kana Moriyama and sophomore Erin Wang to give the Leopards a 2-1 lead heading into singles play.

The Beavers won two singles matches, but that was not enough.

This sealed the win and a postseason berth for La Verne.

Chinn said she cannot wait for the SCIAC tournament to begin to avenge earlier losses against conference opponents.

“Our goal is to finish top five in SCIAC tournament play,” Chinn said. “We got nothing to lose.”

La Verne will compete in the SCIAC postseason tournament this weekend and play at Cal Lutheran Friday at 3 p.m.

Slow down with Snapchat
Commentary: Cinco de Mayo is not your excuse to drink

One Response to Tennis splits with Athenas, Beavers