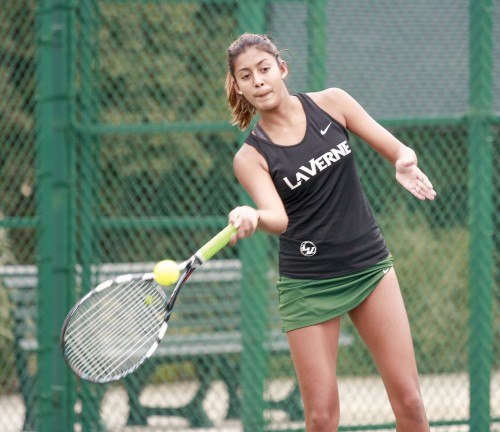 The women’s tennis team finished fifth at the Southern California Intercollegiate Ath­letic Conference Champion­ships last weekend, wrapping up the season with a record of 7-14 overall and 4-5 in SCIAC play.

The team then earned back-to-back victories over Occidental, 6-3, and Caltech, 6-3, Saturday and Sunday at Pomona-Pitzer’s Pauley Tennis Complex.

Before the tournament, sophomore Janae Chinn hoped to avenge earlier losses and said the team had a goal it has been working on since the season started.

“Our goal is to finish top five in SCIAC tournament play,” Chinn said.

On Friday against Cal Lutheran, the Leopards lost, 5-1 and the match was called due to inclement weather.

In Saturday’s game against the Occidental Tigers, the Leopards swept in doubles play to take a 3-0 lead heading into single’s play.

“I think that the team played well together and continually found a way to win,” senior Shenelle Trujillo said.

Freshman Savannah Fisher added one more win to seal the victory for the Leopards with a 6-1, 6-2 win against freshman Andrea Clawson to advance to the fifth place game.

On Sunday against Caltech, La Verne got off to a hot start.

The team won the first two doubles matchups with one loss heading into singles play.

Etchegaray got the Leopards right in it with a 6-1, 6-1 victory over sophomore Vinci Chen.

Martinez would extend the Leopards lead to 4-2.

Trujillo would clinch the victory for La Verne.

After a slow start dropping the first set, 6-1 to junior Sophia Chen, she came back strong with back to back victories winning, 6-4, 6-1.

As La Verne wraps up it season, Etchegaray said she is proud of her teammates’ effort to end the season on a good note.

After much growing pains in a season that ended 7-4, but those four losses came in league play, she said she is still ecstatic of the progress made this season.

“I’m super proud at everyone for stepping up and getting the win,” Etchegaray said.

2 Responses to Tennis swings into fifth at tourney