By Campus Times Editorial Board, Des Delgadillo, Jacob Bogdanoff on May 20, 2016 in Editorials, Opinions 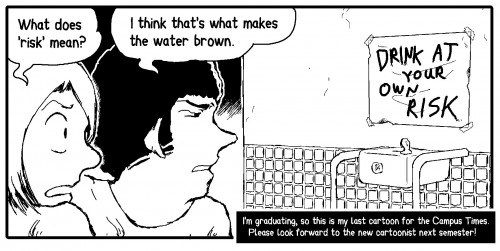 Flint, Michigan, has struggled with obtaining clean water since the 1970s, and today,nearly two years since fecal coliform bacteria was found in the water sources, CNN reports that Flint residents still do not have clean water.

While the causes of the water crisis are under investigation, two years to repair the damage that was done is too long. Flint’s water crisis is just one of many examples of the United States’ infrastructure and crisis management being behind its time.

The Netherlands prides itself in its conscientious, organized water resources. By installing the Water Top Sector, the country focuses “the protection of the Dutch coast, as well as on water-saving systems and water technologies for water recycling.”

Not only is clean water an issue, but the structural integrity of U.S. highways and bridges are questionable as well.

According to the American Road and Transportation Builders Association, 58,495 bridges in the United States were considered “structurally deficient” as of January.

In California alone, nearly 4,500 bridges are considered “functionally obsolete.” The most traveled structurally deficient bridges include major freeways in the Los Angeles area.

Unfortunately the consumption of resources does not make up for the poor, national infrastructure. Unlike the recent trend in European countries, the U.S. falls short with its approach to renewable energy.

Germany is one of the global leaders in renewable energy programs. According to the United Kingdom’s Huffington Post, “Germany managed to use the sun, wind and rain to provide 87 per cent of an entire country’s energy requirements,” and plans to be 100 percent renewable by 2050.

Countries like Costa Rica, Denmark and Norway are all expanding their use of renewable resources, while the U..S still relies on fossil fuels for energy.

For an industrialized country that claims to be a world leader, the U.S. has a long way to go.