By Campus Times Editorial Board, Natasha Brennan on September 23, 2016 in Editorials, Opinions 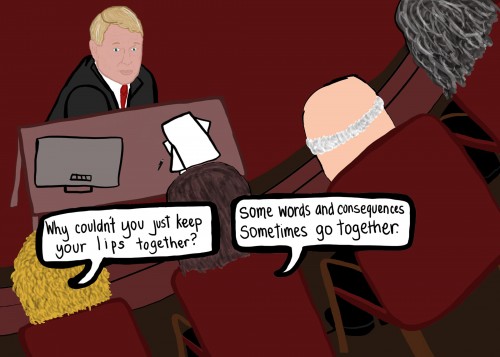 After two years, a Canadian judge, who made disgusting, misogynistic comments toward a rape victim may finally lose his job. In 2014, Justice Robin Camp, a member of the Canadian Federal Court, presided over an alleged rape case in which he essentially blamed the young woman who was assaulted.

Camp made degrading comments such as “why couldn’t you just keep your knees together,” and “some sex and pain sometimes go together,” reported the Sept. 12 Huffington Post article, “Judge May Lose Job 2 Years After ‘Keep Your Knees Together’ Rape Comment” by Chris D’Angelo.

Camp is just one of many judges who are not giving rapists appropriate sentencing for such a horrendous crime. Instead, the victims are being painted as sluts and often being treated with less compassion than their attackers.

Huffington Post Canada reported that Camp’s outrageous statements caused the young woman to contemplate suicide in the Sept. 9 article “Justice Robin Camp Apologizes For Comments Toward Alleged Rape Victim” by Sarah Rieger, which quoted the victim saying, “He made me feel like I should have done something … that I was some kind of slut.”

Society blames the victims for provoking their own rapes, which is one of the reasons why most rapes go unreported. According to statistics from the Rape Abuse and Incest National Network that were gathered from a survey conducted from 2010-2015 by the Department of Justice, only 344 out of 1,000 rapes are reported to authorities. Of those 344 alleged rapes, only 63 reports lead to arrests and six lead to prosecution, including jail time.

We need to come together as a society and stop making excuses for rapists and give them the type of compassion they deserve: none. Rape is a crime along the same lines as murder and deserves to be treated that way.

It is good that Camp is finally being reprimanded for his misogynistic behavior, but it took far too long. We hope that Camp loses his job. Rape is never the victim’s fault and rapists should be treated with the same regard as perpetrators of other violent felonies.