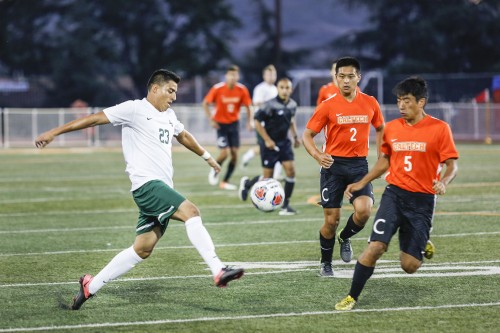 La Verne junior midfielder Justin Funes sends the ball upfield past Caltech senior midfielder Dave Luo and senior defender Kevin Gao during the first half of the game Saturday at Ortmayer Stadium. The Leopards went on to crush the Beavers, 5-1. / photo by Amanda Duvall

From start to finish, the men’s soccer team dominated Caltech in a convincing 5-1 win Saturday at Ortmayer Stadium.

La Verne took 24 shots – half of them on target – throughout the game, against the Beavers’ three shots. Once that superiority started translating into goals, they came in a sequence, and the scoreboard showed 3-0 for the home team at half time.

“The team’s biggest strength was we just stayed out wide,” senior midfielder Justin Funes said. “So we were able to move the ball from side to side and use the whole field, and just take advantage of our speed on the widths.”

Funes scored La Verne’s first goal at the 16th minute, assisted by senior forward and midfielder Jaime Moreno. Before that, the Leopards already dictated the game’s rhythm and populated Caltech’s half of the field but were unable to convert chances into goals.

“The key was to just keep crossing and then get it in into the box. Once it got to the box we would just start shooting away and hopefully some go in,” Funes said.

La Verne managed to leave Caltech finishless for the first 45 minutes while creating solid danger with 16 shots, seven on target.

“The key was to high-press and keep pressure on them the whole game and to make sure that all of our touches were quality, and our finishes were on point,” senior forward Nathan Gonzalez said.

La Verne was confident on its game plan and knew how to exploit Caltech’s weaknesses.

The Leopards controlled the game well and the defense showed readiness to neutralize any danger the Beavers tried to create.

“We had a really good midfield today, so we had two staying in the middle at all times and they were making sure that they were stopping everything and just playing the ball to the outsides,” Funes said. “The middle and defense did good.”

To keep Caltech away from the goal, La Verne relied on a plan of intense pressure, which did not allow the Beavers to move plays forward or connect the defense with the attack.

“We pressured high, our midfielders plugged the lanes so they wouldn’t get any good passes through,” Gonzalez said.

Almandinger said that switching the ball and the plan of attack in the midfield, keeping possession and taking shots were La Verne’s main strengths against the Beavers.

Caltech reached the back of the net only through a penalty kick, scored on the 71st minute by sophomore forward and midfielder Tristan Née.

It is the second game in a row that La Verne awarded the rival an opportunity to score from the 12-yard mark.

Soon after, La Verne’s Gonzalez also scored from a penalty kick, not allowing the Beavers to build momentum or dream of a comeback.

Before the final whistle, Gonzalez scored again to give the Leopards their third win of the season.

“I was going down the left-hand side and Jaime had cut in, and he gave me a through ball through two defenders. I took one or two touches and then just finished it in the bottom right, past the goalkeeper,” Gonzalez said.

The team traveled to Occidental Wednesday, taking home the win, 2-1.

The Leopards are now 4-0-1 on the season. Their next match will be at 11 a.m. Saturday at Pomona-Pitzer.