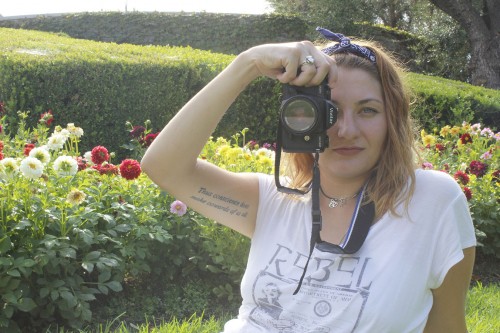 Senior photography major Jerri White, student curator of “Imitations of Self,” wanted to create an exhibit that would challenge photographers and herself. White and six other students stepped out from behind their cameras and photographed self-portraits that can be seen on the north end of the first floor. White says her comfort zone is behind the camera, but she practices her self-portrait skills at home. The exhibition runs through Oct. 14 in the Ground Floor Gallery. / photo by Gabriella Chikhani

Behind the double doors of Miller Hall’s basement lies a brightly lit hallway. Lining the walls are 13 photos, each behind a thin plate of plexi-glass with four nails holding it up and a small tag bearing the photographer’s name beside it.

Hanging on the far left wall is a black and white photo of a young man at the beach. The horizon in the background tilts slightly to the right, leading your eye to a pier that juts out of a 1.25-inch white border.

The ocean behind him is calm with a single rolling wave breaking at the shoreline. He wears a Chicago Bulls hat, a white t-shirt, a button up top, and low hanging jeans. His right hand is placed on his chin as his left arm crosses his torso.

The faint lens flare beside him aligns with his midsection. Far behind him, clustered on the right, are people the size of ants enjoying themselves at the beach.

The joy you can imagine on their faces contrasts his calm, solemn expression.

Sophomore photography major Cameron West said he shot this photo while experimenting with his camera at Redondo Beach.

“I use black and white because that’s my central focus,” West said. “I don’t see color in the world because I don’t look at people as different colors. I just see black and white. That’s what my eyes see and that’s how I wanted people to see me.”

“I love how pensive he is. And the ocean is really soothing,” Alfaro said.

The photograph is a part of “Imitations of Self,” a gallery of self-portraits by 10 student photographers currently enrolled at the University of La Verne.

The gallery, curated by senior photography major Jerri White, is meant to capture the person who is usually behind the camera.

The exhibition gives photographers the opportunity to show themselves and their work.

“For the first exhibition I selected a self-portrait theme coinciding with the beginning of the year,” White said. “It’s featuring the photographers as their own models, so it’s a little introduction of who we are.”

The gallery has been in development since early August.

Photographers had the option to submit up to three photos, which gave them more wiggle-room to be creative.

“I wanted to give the photographers the freedom to express themselves without me dictating what I want,” White said.

The gallery’s theme is loosely based on photographer Cindy Sherman’s “Imitation of Life” currently on display at the Broad Museum in Los Angeles until Sunday.

White will be the student curator for the gallery’s future exhibitions during the fall semester.

“Imitations of Self” will run through Oct. 14.