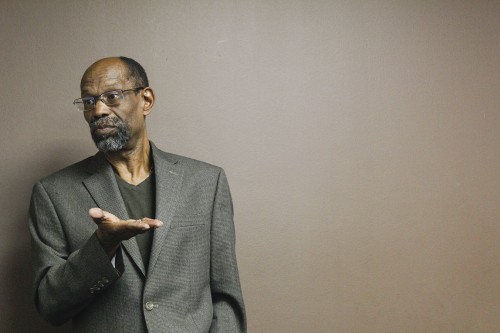 Professor of Religion Richard Rose is an assistant pastor at the Christ Our Redeemer A.M.E. Church in Irvine, and he also is an ordained elder in the African Methodist Episcopal Church. During the faculty lecture Tuesday in the President’s Dining Room, Rose discussed a connection between the seven chakras and The Our Father prayer. In his book, “Seven Meditations of the Lord’s Prayer,” Rose said the seven chakras and biblical versus function as a holistic way of living life. / photo by Gabriella Chikhani

Eighteen students and faculty members gathered Tuesday in the President’s Dining Room for “Seven Meditations on the Lord’s Prayer,” a talk by Professor of Philosophy and Religion Richard Rose.

Based on his book of the same name, Rose’s lecture centered on the correlation between the seven verses and the seven chakras.

“I intend to provide an illustration of the functional similarities that exist within two distinct religious traditions, while opening significant ground for sharing between religious practitioners and the scientific community around issues of top down agency and holistic contemplation,” Rose said.

Using a PowerPoint presentation, Rose showed a verse of the Lord’s Prayer and the correlating chakra side-by-side.

Rose first realized the correlation while in a mediation class at his local church.

Rose thought it was important to break down the prayer verse by verse and meditate on each part.

“As I began to do that I saw seven distinct movements within the prayer,” Rose said.

“As I looked at those verses more clearly, they began to remind me of the seven main chakra systems that we have in eastern yoga or the Kundalini yoga system.”

Outside of the University, Rose is an ordained elder in the African Methodist Episcopal Church and is an assistant pastor at the Christ Our Redeemer AME Church in Irvine.

Among the many questions, Provost Jonathan Reed asked Rose if he ever feels caught between the two worlds of church and academia.

“I’ve often been concerned about being kicked out of the church, but I haven’t been as of yet,” Rose said.

“There’s always this tension that is there, so we’re very clear at the core in our church. We believe in Christian doctrine, but we also affirm that everything is grounded in ultimate reality and that other individuals can approach that differently,” he said.

He was also asked if in academia speaking on spirituality is inappropriate.

“I’m much more comfortable presenting this today than I would have been 15 years ago,” he said.

“I think the academy itself is becoming more open to dialogue that is not strictly based on observable science in the traditional manner.”

“During this time the Muslims, Christians and Jews had this extremely profound influence on one another’s thoughts and belief systems, and it didn’t mean that the other necessarily changed the belief system, but what it did was put it into perspective to better appreciate it,” Badger said.

“This is what Richard was getting to; the interrelatedness, the attempt to demonstrate the connectivity between eastern and western thought.”

Professor of English Bill Cook said Rose’s lecture was applicable to many fields.

“There was such creativity in it,” Cook said.

“I’m going to be teaching ‘The Marriage of Heaven and Hell’ by Blake soon. He married the absoluteness of Christian doctrine going back to the Inquisition,” Cook said.

Rose will present the lecture at Chapman University as a discussion of intersections between religions.