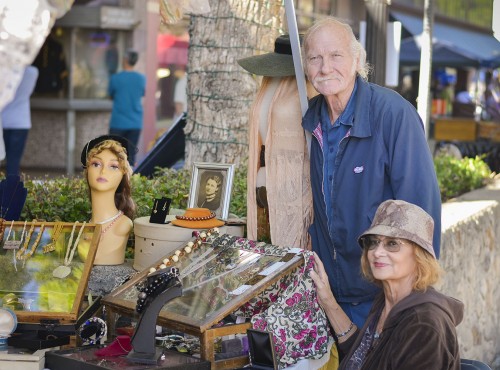 B.J. Smith has bought and sold antiques for 50 years, attending circuit shows, swap meets and yard sales to find products for his business. His booth displays faded sepia photographs, a bread box from the pre-refrigerator days, vintage Russwood copper pieces and an “American Indians” Fandex Family Field Guide from 2002. Collectors like “old new stuff,” Smith said. Unopened products that have been on the market for 10 to 20 years appeal to people, he said. He has participated in the street fair since 1984.

The Collectors Street Faire on Antique Row in Downtown Pomona attracted both professional and amateur antique vendors. Booths lined the sidewalks in front of antique shops at 8 a.m. Saturday on the 100 and 200 blocks of East Second Street.

Nancy Kendall organized the Collectors Street Faire before she closed her business, Kendall Emporium, almost 35 years ago. She told local businesses on Antique Row that she was organizing an auction and asked them to donate items to be sold.

“I was going to advertise all the products they donated,” Kendall said.

Kendall gave one minute of advertising to each business that donated to the auction. Kendall first developed an interest in antiquing when she attended auctions.

“I started out with gold jewelry,” Kendall said.

Now, she buys and sells a variety of antiques. Though Kendall Emporium is closed, she still participates in the street fair. Her daughter-in-law, Debbie Schwoebel, helped her run the business. Now, she and Kendall’s granddaughter, Casey Schwoebel, help her in the booth. Kendall jokes that Casey has “no choice” but to help.

B.J. Smith also enlists the help of family members in running his business. His son, Sharod Smith, has bought and sold antiques as a second job for 10 years.

“I was always helping out as a kid,” Sharod Smith said.

B.J. Smith said the antiquing business is more unpredictable than other markets.

“It changes all the time,” B.J. Smith said. “A lot of it is tied to the music and film industry. That’s why you don’t find as many people doing this to make a living as you used to.”

Kathy Broderick does not sell antiques for a living, but she heard about the street fair through a friend. She sells items that have collected in her garage, some of them handed down by family members.

“My family was passing, and I can’t keep everything,” Broderick said.

Broderick has participated in the street fair for only a year.

She says other vendors buy her items and resell them. Unlike professional vendors, she is not as concerned about making a profit.

“It’s only every other month,” Broderick said, “It gives me something to do.”

The Collectors Street Faire is on the last Saturday of every January, March, May, Septem­ber and November, from 8 a.m. to 3 p.m.