By Campus Times Editorial Board, Natasha Brennan on September 30, 2016 in Editorials, Opinions 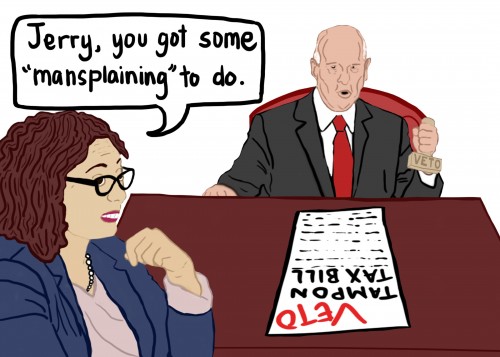 Products like Gucci purses or Coco Chanel perfumes are examples of luxury items – to be taxed. However, 40 states, including California, currently group tampons in the same “luxury” taxable category.

Gov. Jerry Brown vetoed a bill on Sept. 13 that would have made tampons, pads and other menstrual items tax-free. The reason for his veto was that this bill, along with the six others he vetoed, would have cost the state an extra $300 million within the next two years. He also said the issue should have been brought up during the budget.

Assembly members Cristina Garcia – a Democrat – and Ling Ling – were authors of the proposed “tampon tax” bill (to repeal the tampon tax) They called Brown’s reason for vetoing it a “cop out.”

In 2015, it was reported that women make 20 percent less than men in nearly all professions and pay 13 percent more for personal care products than men.

This is known as the “pink tax,” for so-called feminine products.

No woman will tell you that her monthly cycle is a luxury, so why are the products considered one? It is a fair assumption that most people who think tampons and pads are luxuries are the same people who would become incredibly uncomfortable if every woman decided not to use them.

We are talking about a biological and medical need, a part of what it means to be a woman that requires attention and care monthly. It is unfair to tax these products while at the same time women earn less, pay more and are continuously ignored by the men in charge.

He said he has no idea why states would place a luxury goods tax on feminine hygiene products, but said it was probably because men were making the laws when those bills were originally passed, as reported in the Time magazine Jan. 15 article “President Obama doesn’t Understand the ‘Tampon Tax’” by Maya Rhoden.

Birth control, condoms, even Viagra (at least in Minnesota), are all tax free due to their classification as necessities. Maybe Brown could balance out his projected $300 million by taxing erectile dysfunction medication instead of tampons.

A change needs to happen so California, along with the other 39 states, as this will be a small step toward closing the gender gap.