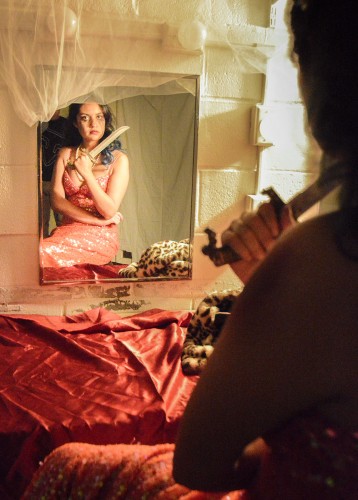 Portraying a murderous fallen actress, freshman Madelyn “Jane” Duran looked to the crowd as she located her next victim Tuesday at the Theatre Department’s haunted house. Hosted by senior Michaela Bulkley, the haunted house finished the night as a huge success as more than 700 students attended the haunted halls of Dailey Theatre. / photo by Janelle Kluz

Piercing screams came from the Johnson Family Plaza Tuesday night as five women ran from Dailey Theatre. A member of campus security quickly responded, asking the girls if there had been a clown sighting.

There was one. In fact, there were three.

The darkness of the University Mall prepared visitors for what was waiting inside the haunted circus in Dailey Theatre on Tuesday night.

The experience started with descending a small staircase to enter the theater. Behind a sheer black curtain, a young woman swings from a long piece of blue silk suspended from the ceiling. The eerie piano and low light make it hard to find the door to the next room.

“You’re not leaving,” she said.

Suddenly a door creaks open, the soft red light from behind it glows along the edges. The light hits your shoes and you realize you must go forward.

As you enter the dressing room you notice a woman in a long sparkling gown. She seems harmless as she admires her reflection in the mirror until from the corner of your eye there’s movement. A man lies on the ground screaming for help as the woman shifts her attention from the mirror to the knife in her hand. There isn’t an exit. You have to go back out the way you came.

Leaving the dressing room puts you in a dark hallway. The only sense of direction you have is the light at the end of the dark tunnel. Out pops a girl with bloodied holes in her face. The mirror behind her makes it seem like there’s three of her.

You run toward the light. A screeching laugh comes from your left and you see the face of a murderous clown. To your right the metal doors are shaking.

You follow the dark path the rest of the way until you’re on a stage lit by a dull blue-green light. A girl with a bloodied face cries in the corner, her disturbing drawings are scattered around her. One has the word “clown” scribbled all over it in purple crayon. Soon, you notice the clown doll in her hands looks like the clown behind you.

Turning away from the clown you see a beautiful ballerina in a red tutu gracefully dancing on her tippy-toes, black and white film of an old circus runs behind her on a screen. Her movements are mesmerizing; it isn’t until she runs at you with a deep growl that you notice she isn’t a friendly dancer.

Running from the stage you see the bloody sign on the door, “Exit.” You climb the staircase and out pops in front of you a sweet looking girl with long pigtails and a blue dress with white polka dots. In her hand is a huge knife, her mouth is sewn shut. You run for the exit, climb the stairs, and suddenly you’re back in the Johnson Family Plaza. Safe. The laughter of clowns is behind you with the door shut.

The haunted circus was put on by the theater program as a part of senior theater major Michaela Bulkley’s senior project, the Cabaret Series.

“The reason we went with this theme is because it’s more real, it’s not a bunch of jump scares,” Bulkley said. “It’s creepy and scary. We want to go big and own these characters.”

In the first room, sophomore theater major Courtney Clark, an aerialist, gracefully swung on blue silk. Clark has been practicing aerial since the summer and teaches aerial basics at a children’s fitness center.

Clark drew inspiration for her performance from a scene in the film “Suicide Squad” where the character Harley Quinn does aerial in her jail cell. She drew from Harley Quinn’s whimsical yet murderous attitude.

“We are a theater and actors so we get the chance to really get into it and be characters,” Clark said. “The idea is that I murdered a bunch of people, but I don’t care, I’m just doing my thing.”

Freshman theater major Mallorie Johnson played a young girl traumatized by clowns crying in the corner of the main stage. Johnson’s co-star was a clown doll her grandma found while preparing for a yard sale recently.

Johnson has four years of previous experience working in a haunted house at her high school.

“Each group that comes in is different,” Johnson said. “The trick is reading your audience really fast.”

The haunted circus went on from 10 p.m. to midnight. Clusters of students ready to be spooked came to participate all throughout the night.

All visitors and actors had to sign liability forms before participating in the circus.

“The ballerina really creeped me out. She was so graceful, but I thought she was going to kill me,” Bennett said.

There are four more events in the Cabaret Series. The next will be a dance concert at 10 p.m. Tuesday in the Jane Dibbell Cabaret Theatre.