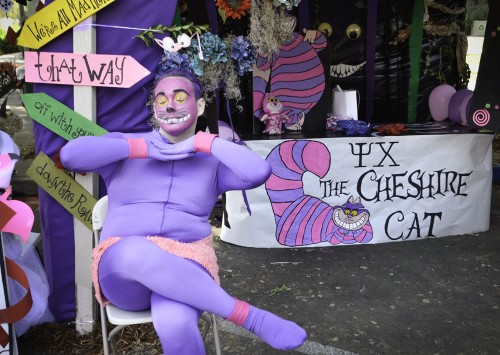 As Homecoming Week drew to a close Saturday, the campus transformed into the fantasy world of Alice in Wonderland for the annual homecoming fair.

Students, faculty and alumni participated in the celebration by decorating their booths as different characters from the movie, like the Mad Hatter and the Chesire Cat.

“We gave them a carnation because that’s our flower and a piece of ‘Delta Mail’ where each of our active sisters wrote a personalized note about what Iota Delta means to them,” McMinn said.

“They were really excited to about that as well as taking pictures at our photobooth.”

“I’m still pretty lost for words about winning,” Azarcon said. “Coming into La Verne I didn’t know anybody, and to see a lot of people support me through this, it was really nice to be recognized for all of my hard work.”

The names of Homecoming King and Queen were revealed using the handles of a life-sized clock depicted in Alice in Wonderland.

The court later participated in the Homecoming parade.

“It was nice to sit in a car and be driven around and be shown off to all the clubs and organizations on campus,” Azarcon said. “It was a moment that I will cherish forever.”

The parade also featured floats created by the clubs and organizations that participated in the fair. At the end of the parade, Psi Chi received a cash prize for winning the float and booth contests.

“We had a hunch that our booth and float would do well, but we didn’t know for sure if either would place first,” senior psychology major Corenne Hall, president of Psi Chi, said. “When they announced the winners, everyone in my club tackled me with surprise and it was a rewarding moment.”

“She delegated our task work for Homecoming and put us in different committees,” Hall said. “It made building our float and our booth a lot easier and more efficient.”

Both contests were judged by a panel of alumni and administrators.

Oswaldo Jaime and Janelle Pedroza, Campus Activities Board major events co-chairs, put together Homecoming and played a considerable role in its success.

“It’s been two months of planning, so seeing everything finally come together and having my vision come to life was the best feeling,” Pedroza, sophomore biology major, said. “All the club booth themes were very elaborate and dramatic which I really liked. You could see a lot of their creativity show.”

“It was a bit overwhelming, but it was a great accomplishment for me seeing everyone happy,” Jaime, junior business administration major, said. “I’m glad that I had a co-chair as amazing as Janelle.”