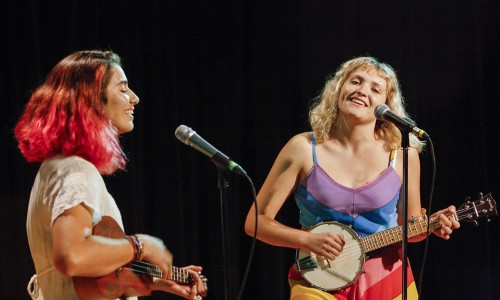 Female student artists from a variety of majors and approximately 30 students gathered Tuesday in the Jane Dibbell Cabaret Theatre for Music Night, an all-women artist event.

The event is part of the Cabaret Series, a 13-week program of events to allow a forum for student artists.

The tightly packed theater shrouded in black curtains and illuminated by soft white and pink light gave the perfect intimate setting for the artists’ personal, original songs and poems and melodic covers.

To kick off the night, senior music major Annie Johnson and sophomore music major Lorali Mossaver-Rahmani, together known as the Companions, sang an original song and two John Denver covers.

Senior English major Emma Saturday followed the Companions with beautiful piano melodies. Saturday performed barefoot, playing “Out of the Darkness” by Michele McLaughlin, a piece written by her father and a piece she wrote herself.

Before playing her last piece, an original, Saturday told the audience about her summer trip volunteering at a farm in Virginia for 10 weeks.

“While I was over there the house luckily had a piano, and I wrote this song for my boyfriend while I was away from him for 70 days,” Saturday said.

Immediately the crowd went “aww.” A “That’s so cute” could be heard from the back of the audience.

Later in the night singer, Natalia Esquivel, a guest performer, played three songs including, “I Am Woman,” which she said was an original work, and it received the loudest applause of the night.

“This song came from all the emotions of being a woman,” Esquivel said.

After Esquivel, senior theater major Michaela Bulkley read a monologue centering on a woman with an eating disorder and the abusive nature of that situation. The piece was from the theater department’s upcoming staged reading of “Citizen: An American Lyric.”

When she finished, Johnson could be seen mouthing “Wow” as the audience applauded, some even wiping away tears.

Next, sophomore theater major Ashley Weaver invited any performers or audience members who knew the lyrics to Alicia Keys’ “No One” to come up and sing along. As she played on the piano, she was accompanied by a small choir of four performers. The crowd rhythmically clapped along.

To wrap up the night, senior Spanish and creative writing major Guadalupe Robles took to the stage to perform an original poem written in Spanish.

“I’ve been writing poems in Spanish a lot lately because I’m homesick and miss Mexico,” Robles told the audience.

The Cabaret Series is put together by Bulkley as a part of her senior project. She decided to have a ladies’ night to inspire women on campus to share their art.

“I’ve had open mic nights with a lot of men who said they wanted to perform and I was like, ‘I know there’s women on campus who want to perform,’ but I know it takes a little more empowerment and encouragement for women to want to be vulnerable with their art,” Bulkley said.

There was no auditioning process to be a part of Music Night. To perform, artists simply contacted Bulkley or volunteered to perform during the event after all scheduled performances were over.

“A lot of these people I just know through networking,” Bulkley said. “I feel like a lot of my senior project is empowering the artists I know to perform because I feel secretly they want to, but they’re scared because it makes you really vulnerable. It’s putting your heart and your soul into your work and then putting it out into the world and saying ‘Please like it.’ I think I’ve created an environment where no one cares if you mess up, we just appreciate that you’re trying to produce art.”

Next Tuesday’s Cabaret Series event will be Face Off, a live special effects makeup competition. The entire theater will be turned into a haunted circus Tuesday Oct. 25.

Both programs begin at 10 p.m.