By Natasha Brennan, Taylor Bolanos on October 14, 2016 in Basketball, Sports 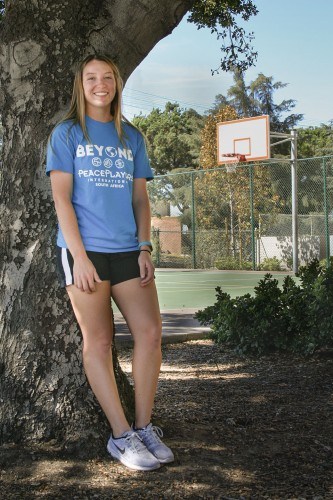 Senior kinesiology major Faye Osburn spent 10 days in Cape Horn, South Africa, this summer as a participant of the Beyond Sport organization. Beyond Sport builds community between athletes and others globally to bring awareness to social issues. Women’s basketball coach Julie Shaw selected Osburn for the trip, allowing her to coach high school students while abroad. / photo by Taylor Bolanos

On a gloomy day, a sea of clouds covers what should be a view of Cape Town, South Africa. From the apex of Table Mountain, one of the New Seven Wonders of Nature, the fog is so thick taking a picture is a waste, but the surroundings are still a sight to see.

Senior kinesiology major and women’s basketball shooting guard Faye Osburn took the journey of a lifetime this summer to this very spot on her 10-day volunteer trip, teaching young South Africans the game of basketball.

Osburn is currently on her second year as team captain for the women’s basketball team. She has been playing basketball since kindergarten.

Osburn typically spends her summers as a lifeguard at Magic Mountain’s Hurricane Harbor, but this year she took an invitation from Beyond Sport – a charity specializing in bringing the impact of sports to underprivileged areas around the world – to be a coach for its first South African basketball clinics. Beyond Sport partnered with PeacePlayers International for this trip.

“I think they took a look at our website and saw the stats and whether the player was a junior or senior and took that into account on how they chose who to invite,” Shaw said.

On July 27, Osburn flew from Los Angeles to New York where she met with the 11 other American volunteer coaches. From New York she flew to Johannes­burg, South Africa and then to Cape Town, where two South African coaches met them.

“Johannesburg is what you would expect Africa to be: brown, not very many trees, and animals roaming around,” Osburn said. “Then we got to Cape Town where there were mountains and it was all green. It was very different than what you would think Africa is like.”

The group of 14 coaches stayed at a Cape Town hotel near the beach. The group taught basketball clinics, toured Cape Town, and the female members of the group played in a women’s tournament at the University of Cape Town.

“We never went back to the same place again, there was only one place we went to twice,” Osburn said.

“They were super cute,” Osburn said. “It was fun watching them get so excited about just learning how to do basic things and seeing them get out of their comfort zones.”
However, their age and the length of the clinics sometimes proved difficult.

“It was really hard just making them pay attention sometimes because the camps were a couple hours long,” Osburn said. “At first they were super into it, but you could tell when they got tired or bored of something. The challenge was trying to get a good mix of skills and fun games to play with them.”

Osburn explained that in her experience, South Africa had a lot of American influence. However, constantly going out to eat made her miss a home-cooked meal.

“For the most part, a lot of people spoke English, especially when they were interacting with us,” Osburn said. “Burgers, fries and pizza are a big thing there, so we had that a lot.”

During her time in South Africa Osburn toured Castle of Good Hope, the District Six Museum and went on a safari. One of the highlights of her trip was a visit to Robben Island, where Nelson Mandela was once held as a political prisoner.

“What was really cool was that our tour guide was a former political prisoner there, so we got a little insight on what it was like,” Osburn said.

“When you get up to the top of the mountain you don’t realize how high you are,” Osburn said. “You couldn’t see that far in front of you. We tried to take pictures and it was all haze, but it was beautiful.”

Osburn, afraid of leaving the country alone, originally did not want to go on the trip, but was convinced by her mother.

“I honestly didn’t want to go at all, the only other place I had been is Mexico,” Osburn said. “And my mom was like ‘This is the trip of a lifetime, if you don’t go you’re going to regret it. Once you start working, you’re not going to have the time to explore.’ It was just a giant leap of faith. I think the hardest part was going halfway across the world and not knowing what to expect.”

Osburn said communicating with her family was difficult.

“I didn’t have much time to talk to them except when I was at the hotel,” Osburn said. “I would send them pictures whenever I had the chance. I got a couple people in my family these bracelets you buy and the money goes to a non-profit for that cause, like malaria and building schools.”

Osburn returned Aug. 8. She said the down side of her trip was the long plane ride back.

“It’s about a 15-hour plane ride, we were so happy to finally land,” Osburn said. “Between sleeping and them giving you food, you would just stare at a screen and watch movies, but you can only watch so many.”

Osburn described the trip as a life-changing experience that helped her remember why she enjoys basketball.

“Coaching the camps made me realize how much I love basketball and why I started playing,” Osburn said. “It means so much to me to have had this experience since this will be my last season. It was a good reflection on how far I’ve come and how much I can continue to grow not only as a basketball player but in life in general.”

Shaw describe the trip as a learning experience all players should participate in if given the opportunity.

“I think what they did over there makes a good player and a better person,” Shaw said. “This trip gives a great opportunity to learn and see things you never would, like interacting with new people and learning to be humble and thankful. It opens a lot of doors and I’m glad Faye went through this one.”

Osburn said she would love to explore Cape Town and South Africa again if it weren’t for the plane ride, but is still very interested in Beyond Sport’s basketball program in Costa Rica.

“I would definitely want to go on another Beyond Sport trip and just keep teaching the game that I love,” Osburn said. “Africa really made me realize how simply you can live and how much joy you can get out of the little things in life. Seeing the kids’ faces and how happy they were just from us bringing them basketballs showed that we don’t need everything we have here. We have so many things we worry about that we don’t need to.”

Outside of basketball, Osburn is a member of Sigma Kappa and previously was the women’s basketball representative for the Student-Athlete Advisory Committee. She aspires to be a nurse.