By Alexandra Felton, Donna Martinez on October 7, 2016 in LV Life 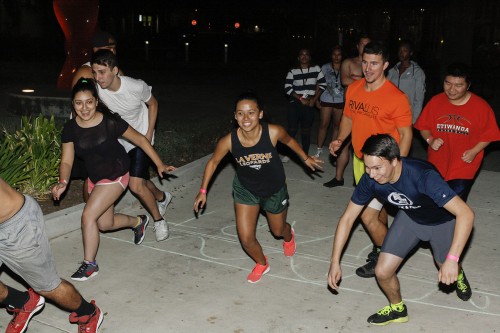 The Residential Housing Association teamed up with the Campus Activities Board to host the sixth annual Undie Run Sept. 29.

The Thursday evening event included a clothing drive in support of the American Red Cross.

At 9:30 p.m., RHA members checked in the small-but-enthusiastic group of about a dozen runners – most of whom wore more than their skivvies, despite the event title.

At the same time, final touches to the running course were being mapped out with chalk, including the route arrows.

The run itself was a half-mile around campus.

The runers took off at 10 p.m., and went from the Johnson Family Plaza to the Mainiero Building, through to Founders Hall, next to Davenport Dining Hall, then crossed the street parking lot to the lawn.

At the finish line, they were greeted by music, T-shirt crafting and more – including a donation box for clothing.

“We collected around 150 articles of clothing for the Red Cross,” Corcoran said.

“Teaming up with CAB is always a great idea, because they bring the music and the activity setting which is appreciated ,” said Timothy Polman, a RHA member and senior psychology major, who also worked on the event.

Although turn out was on the low side, Mandy Chavez, CAB concerts chairwoman, said it was successful.