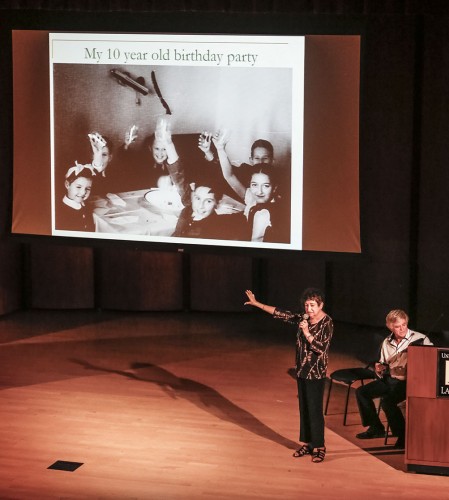 Gabriella Karin, a child survivor of the Holocaust, shows a photo of herself at her 10th birthday party. Of all the children pictured, she was the only one who survived. She was accompanied by fellow Holocaust survivor Robert Germinder at the Child Survivors of the Holocaust lecture in Morgan Auditorium Tuesday. / photo by Amanda Duvall

Child Holocaust survivors Gabriella Karin and Robert Geminder shared their stories Tuesday in the Morgan Auditorium to honor the 11 million that perished.

Karin was born in Czechoslovakia. At the start of the war, the Czech territory became a protectorate of Nazi Germany while Slovakia became an independent nation that collaborated with the Germans. The deportation of Jewish people in Slovakia began in 1942. Of the 60,000 Jews that were deported, only 230 returned.

When Karin was 11 years old, Karin’s mother obtained false papers for her and sent her to a Christian boarding school. She had to hide her Jewish identity to avoid deportation.

“I cried myself to sleep every night,” Karin said.

One year later, Karin’s mother allowed her to attend school during the day and leave every night.

Karin’s mother, who was part of the resistance, received a list from the police that showed which Jewish families were to be deported. Her cousins were on the list. Karin had warned her cousins of their upcoming deportation, but the family did not leave. That was the last time Karin saw them.

In 1944, Germany occupied Slovakia. Karol Blanar hid Karin’s family for nine months in his apartment in Bratislava. Though the Nazis had checked every house and apartment for hidden Jewish people, they had never checked Blanar’s apartment. Blanar’s apartment building had been barred to Jews since it was built in 1935. The apartment was just across the street from Gestapo headquarters.

“I could see inside the doorways, and I saw many things,” Karin said. “I saw the two girls who were with me in the convent when I was younger, running in the street. They were caught outside my house and pulled into the headquarters.”

The Nazis had searched for Jewish people in the boarding school that Karin had attended. The nuns had let the two Jewish students escape the school. Karin never saw the two Jewish girls again.

Karin spent those nine months in Blanar’s apartment reading whatever Blanar provided, from Dostoevsky to Tolstoy. Those months worth of reading kept her mind working; after the war, she had taken a test and jumped a grade.

“Everything can be taken away from you, even the clothes you wear,” Karin said. “But nobody, nobody, can take away from you what you have in your head. Put good stuff in it.”

After the war, Blanar fled the country and Karin lost track of him. She found out that he died in 1980 and been buried in an unmarked grave in Ohio. Yad Vashem, the largest Holocaust museums in the world, awarded Blanar the title of Righteous Among the Nations. Karin bought a marker for Blanar’s grave with the title awarded by Yad Vashem.

Karin showed pictures of her childhood in a slideshow. One picture showed her as a six year old, another showed her parents in front of the store they owned, and another picture showed Karin with her friends at her 10th birthday party.

“I’m the only one who survived,” Karin said. “Out of all my friends, every one of them.”

Robert Geminder grew up in Wroclaw, Poland. In 1939, when Geminder was four years old, Germany and Russia made a deal and split Poland in half. Germany got the western half, and Russia got the eastern half.

Geminder’s family left Wroclaw and trekked to Stanislawow, a city that is now in Ukraine.

At the time, Poland had the largest Jewish population in Europe, numbering 3.3 million. Of those 3.3 million, only 300,000 survived.

In 1941, the Germans transported 20,000 Jews to a cemetery, where mass graves were waiting for them. The Nazis shot 14,000 Jews, stopping only because it was getting dark and began to snow. Geminder was one of the 6,000 survivors.

“(It was) one of the largest massacres of the war,” Geminder said.

When Geminder’s family returned to their home, the Nazis had taken everything except for a water bucket with a false bottom. That bucket hid valuable jewelry that Geminder’s mother later used to provide for the family.

The remaining 6,000 Jewish people were put in ghettos. This served as a temporary holding place for the Jewish people later sent to concentration camps. Geminder’s mother escaped the ghetto with her two children and made it to Warsaw. A farmer hid Geminder and his brother temporarily. His brother had blown his cover by wearing a hat to church, and his mother had taken him away. Meanwhile, Geminder hid in the attic of a barn for 10 weeks, relying on raw chicken eggs and leftover meals meant for pigs for sustenance.

Geminder’s family lived in several towns just outside Warsaw, moving whenever they thought someone suspected them of being Jewish. After news of Russian forces invading and raiding small towns, Geminder’s family moved into Warsaw.

In 1943, the Jewish people from the ghettos fought off the Nazis for 63 days in what was to be known as the Warsaw Ghetto Uprising. The remaining Jewish survivors were put in rail cars to be sent to Auschwitz. Geminder’s family was placed in an open car.

When the train stopped 100 yards away from Auschwitz, Geminder’s family escaped the open car. They were the only ones to escape from the rail cars that day. They stayed with a farmer, narrowly avoiding being found by the Nazis. Two months later, Russian forces liberated Auschwitz.

Geminder and Karin talked about a post-Holocaust world and the importance of sharing their stories during a Q&A session with the audience.

“One of the reasons we talk about it is to tell you what happened, what a nation can do to innocent people,” Geminder said. “Keep in mind, in 1939, when the war started, the most civilized nation in Europe was Germany. They had the most university professors, college-educated kids, etcetera, etcetera, etcetera, in all of Europe.”

“I just have to mention that, after (the) Holocaust, 46 genocides occurred,” Karin said.
The speakers talked about the lives of Holocaust survivors immediately after the war. Many of the dead did not have graves, and many of the survivors did not have living relatives or homes to return to. The survivors who returned to their hometowns found that their gentile neighbors had taken their property and were unhappy that the survivors had come back.

Some attempted to return to the communities they came from and live normal lives. The gentile populations, holding onto their antisemitism, did not welcome the Jewish survivors.

Geminder and his brother had gone to a movie theater when other children identified them as Jews and chased them out. Geminder’s family went to west Germany and lived in a displaced persons camp run by American soldiers. Two years later, they moved to the United States. Karin, unable to get into the U.S., had moved to Israel in 1948.

When Karin was 14, she wondered how she would live a normal life after the war. She and other survivors often went to the railroad station, hoping to see if anyone they knew had lived. Karin decided that she would try to remain resilient and optimistic about her prospects.

“Hitler did not get my body, and he will not get my soul,” Karin said. “I was alive, and I will be happy.”
“Sometimes people ask me ‘why do you talk about this?’” Geminder said. “You know, it’s not easy. We do it because who else is going to talk for these 11 million people, tell me. Most of them don’t have anybody to talk for them. Nobody!”

“We speak, I speak, to make sure that as long as I’m alive, we give respect to the ones that died,” Geminder said. “To keep their memory alive.”

Students were awestruck by the survivors’ optimism, resilience and openness.

“I thought it was very personal, more personal than I thought it would be,” said Austin Denison, sophomore business administration major. “But that’s the best way to tell it.”

The students appreciated the opportunity to hear a survivor’s story in person, rather than in documentaries and history classes.

“The next generation, in all likeliness, won’t have something like this,” said Alexa Jones, sophomore mathematics major. “Our kids won’t hear about it first hand anymore.”

President Devorah Lieberman was struck by the survivors’ willingness to share their harrowing stories. She reflected on her own mother, who left Europe in the 1920s. Her mother’s relatives, save her immediately family, stayed behind and perished during the Holocaust.

“She wasn’t comfortable talking about what happened in Europe because it was too painful,” Lieberman said. “They’re courageous, for them to share their stories, day after day after day, with audiences they don’t know.”

The two Holocaust survivors have been sharing their stories for years. They maintain the same hopeful outlook and they keep their same goals in mind.

“It has always been to give a talk and remember those that have nobody to remember them by,” Geminder said.

Karin said that the audience may sometimes compare the survivors’ lives to their own, reflecting on problems they may face. She hopes to inspire hope and resilience in the audience.