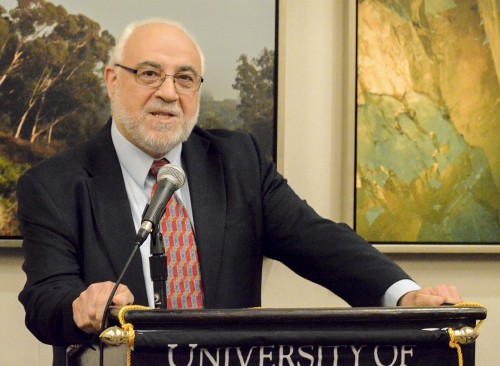 Aghop Der-Karabetian, professor of psychology, retires this spring after 37 years of service. Der-Karabetian was among those honored last Friday during a College of Arts and Sciences awards reception at the Sheraton Fairplex Conference Center. / photo by Janelle Kluz

The College of Arts and Sciences recognized faculty members for their commitment to excellence Friday at the Alumni Awards in the Sheraton Fairplex Conference Center.

This is the first time the college has had an award ceremony at the event to highlight faculty achievements and excellence, College of Arts and Sciences Dean Lawrence Potter said.

“Our rewards and recognitions allow us to show employees that we really care about what they do, how they do it, in support of the mission of this university and the students, the very reason we are here,” Potter said.

Each college at the University of La Verne held its own ceremony to recognizes its faculty and students.

The College of Arts and Sciences presented engraved glass awards to seven faculty members for their excellence in certain categories and honored four retirees.

Professor of Political Science Richard Gelm was recognized for his excellence in teaching.

Professor of Political Science Jason Neidleman was awarded for his excellence in scholarly engagement.

“It’s really good that the dean has instituted this recognition ceremony, and it’s very rewarding to recognize faculty on an ongoing basis, so I’m very appreciative of that,” Neidleman said.

Associate Professor of Biology Kathleen Weaver received the award for excellence in extramural grant funding. She received more than $6 million in total grants, the biggest in the history of University, Potter said.

Associate Professor of Creative Writing Sean Bernard was recognized for his excellence in creative activity.

Professor of Biology Christine Broussard received the award for excellence in service to the University.

Potter then recognized four faculty members who are retiring at the end of the school year.

Professor of Psychology Aghop Der-Karabetian has worked at the University for 37 years.

“In 1980, when I first walked on the campus, I said ‘Well, I’m going to hang out here for a little while and then find a better place’ and guess what happened. This was the better place,” Der-Karabetian said. “La Verne has been a nurturing place for me in my early career, and I had a wonderful time getting acquainted with my colleagues in all departments.”

Professor of Theater Arts David Flaten was recognized for his 35 years of teaching theater.

“The kind of honesty and integrity of the students that we have made me decided that we can really do great stuff here,” Flaten said. “I’m more than grateful for the opportunities that I’ve had at this institution.”

Director of Theater Steven Kent has been at the University for 25 years. He first came to the University after traveling for 15 years as a professional director.

Professor of English Alden Reimonenq was on sabbatical and could not attend the ceremony, but he was still recognized for his 10 years of service.

“It’s especially nice to see retiring faculty to be recognized and celebrated,” Bernard said. “I hope they are more celebrated later in the year as their retirements come closer, but it’s very nice for them to get a chance to speak about their experience.”

The night continued with a dinner, where five alumni were recognized for their services.

Alumnus Art Acevedo received an award for his service to his profession as the first Hispanic chief of police of the Austin Police Department.

College of Law alumna Soheila Azizi was recognized for her service to the community as an attorney in the Inland Empire for more than 20 years.

Alumna Keisha Grant received the Distinguished Alumni of the Year award for her national accomplishments as a night anchor for NBC Connecticut.

The night ended with a dance party where faculty, students and alumni mingled and connected over La Verne memories.