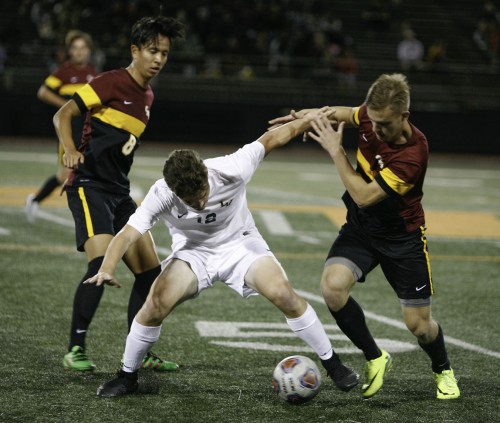 With the game tied at 1-1, freshman midfielder Ryan Adams fights off Claremont-Mudd-Scripps’ sophomore midfielder Yusuke Kobayashi and freshman defender and midfielder Luke Scanlan Saturday at Ortmayer Stadium. La Verne defeated the Stags, 2-1, with a goal on the 85th minute. On Wednesday against the Whittier Poets, the Leopards won 1-0 with another late goal by Saul Uribe. / photo by Gabriella Chikhani

Senior forward Saul Uribe came to the rescue twice in the same week to earn the Leopards wins in the final minutes against the Claremont-Mudd-Scripps Stags and Whittier Poets.

Only five minutes before the final whistle, Uribe put the ball in the back of the net to crack a leveled game against CMS on senior night, managing a 2-1 victory Saturday at Ortmayer Stadium.

Four days later, at the Graham Soccer Field, a golden goal by the forward avoided overtime seconds away from the end of the second half to reward La Verne with another win – the third consecutive.

Against the Stags, the game was open and hard to untangle, tied scoreless until the 62nd minute when the Leopards got ahead. CMS later equalized from the penalty spot, and a late goal gave La Verne the win.

“We were very organized offensively and defensively,” head coach Trevor Persson said. “We came in with our game plan and we executed maybe 90 percent of what we wanted to do. We came in with a mindset, we came in with a belief and a tactical strategy that played out in our favor.”

The teams had an equal number of shots on target on both halves – one on the first and two on the second for each – and the game was as balanced as it was physical.

The Stags committed 18 fouls against La Verne’s 13, with three yellow cards for the visitors and none for the hosts.

“I think we played great, there’s a few moments we could’ve done a bit better but honestly we just grinded it out and got the win,” senior forward and midfielder Jaime Moreno said. “It was closer than it should’ve been I think, we just couldn’t finish our opportunities we had early, and it came back to haunt us in the second half.”

The score-opener for La Verne came from a Stags’ own goal, a header from a CMS defender who tried to deflect junior midfielder Javier Jasso’s free kick.

Despite the change in score, the game’s intensity and electric pace remained the same.

“I thought we were pretty solid, all the way from the back to the front, very organized,” Uribe said. “So that organization and the communication really helped us to get the result we wanted.”

After the Stags were awarded a penalty and tied the game on the 79th minute, the teams oscillated moments of superiority and pressure, bringing danger and defending from it.

La Verne almost got the winning goal 10 minutes from the end, when senior midfielder Briley Venti shot a precise ball that hit the crossbar, then the grass, only to not go in.

Finally, on the 85th minute, Uribe delivered on the Leopards’ hopes and scored the game-winner.

“You can pretty much imagine, but scoring on the senior night with about five minutes left, it’s an amazing feeling,” Uribe said.

“Beto hit a dime of a ball, Audie took them one-on-one, he hit the cross back post just how we always do it, and I was just open back in. I was setting Chris, just crossed it back in to make it an easy goal. Crossed it back in, tapped it in and got the win,” Uribe said.

“I thought we pulled together early on, it’s just that we had a little bump in the road because of the penalty, but I thought we played well,” senior forward Nathan Gonzalez said.

“I think the main thing we need to improve on is staying consistent, keeping our same level of energy through the whole game.”

On Wednesday night, the Leopards managed to get a thrilling and crucial 1-0 road win against the Whittier Poets, with Uribe saving the day again.

After 90 scoreless minutes, the forward pulled off a golden goal with one minute left on the first half of overtime to keep their Southern California Inter­collegiate Athletic Conference title hopes alive and extend La Verne’s winning streak.

In a dispute with the Poets’ senior goalkeeper Jorge Rivas, Uribe managed to win the ball and run past Rivas, to tap it into the net and seal the win.

Uribe is La Verne’s top scorer in the season, with ten goals in 15 conference games.

Only 16 minutes into the game, the Poets had a chance to get ahead from the penalty spot, but sophomore goalkeeper Josh Ramirez dove right to pick the correct side and stop the ball from going in.

Ramirez’s protagonism was not limited to the penalty stopped, and the goalkeeper collected 10 saves to keep La Verne in the game against a team strong in creating chances.

Whittier had a total of 18 shots, 10 of them on goal, while the Leopards accumulated 21, eight on goal.

They will take on Redlands, ranked first in SCIAC, to conclude the season tonight. With a win, La Verne could claim the championship if the Bulldogs fall to the Occidental Tigers on their senior night Saturday.

With hopes of making it into the postseason tournament, La Verne has the advantage of an experienced group to fight for the title.

“We’re not in yet, but I think we have a lot of experience. We have 10 seniors, so we are going to lean on them a lot as we make our push towards the playoffs,” Persson said. “I think our strength is that we’re kinda gelling at the right time, we’re coming together as a team at the right time.”

The group relies on their harmony both on and off the field to bring them together in this crucial time of the season.

“I think our biggest strength is our chemistry, our unity, the bond that we have,” Uribe said. “I feel like this year especially we’ve gotten a lot closer as a family, and it just makes it easier for us with communication, organization and everything that helps us.”