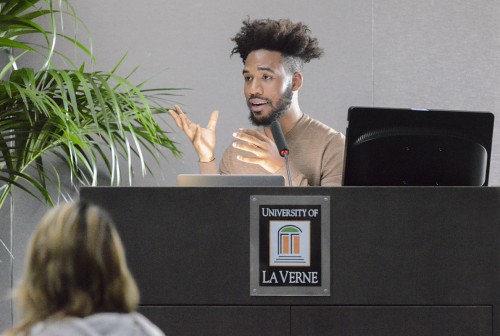 Photographer Joshua Rashaad McFadden expands on his early project “Colorism” Oct. 11 at a lecture and discussion session in the Campus Center Ballroom. McFadden later attended the reception in the Carlson Gallery to discuss his work, “After Selma,” which revisits the African-American experience leading to and beyond the Voting Rights Act of 1965. / photo by Janelle Kluz

A modern version of the African-American protest anthem “We Shall Overcome” played over a slideshow of photos from “After Selma” photographer Joshua Rashaad McFadden. His collection was displayed in the Carlson Gallery until Oct. 14.

Seats were filled from the front to back rows during a conversation about his photo exhibit Oct. 11 in the Campus Center Ballroom.

The conversation was immediately followed by a book signing of “Come to Selfhood” and a reception in the Carlson Gallery.

McFadden began his presentation with a video montage of clips from different shows, movies and commercials that showed the extreme joys and pains of life as an African-American.

The montage included Ricky’s shooting scene from “Boyz N The Hood” and Diana Ross singing “Can You Feel A Brand New Day” from “The Wiz.”

His goal was to show the extreme rejoice that allows African-Americans as a collective to make it through traumatic circumstances by showing a video he captured of people singing gospel song “Can’t Nobody Do Me Like Jesus” outside of Emanuel African Methodist Episcopal Church in Charleston, South Carolina, after the fatal shooting in 2015.

“After Selma” was started by McFadden in January 2015, after it was announced that there would be no case for the murder of Michael Brown in Ferguson, Missouri.

McFadden said he learned a lot about the Civil Rights Movement by working under Martin Luther King Jr.’s daughter, for five years in Atlanta. McFadden decided to see for himself if people were going about the Black Lives Matter movement the right or wrong way.

When shooting for “After Selma,” he saw all races together communicating and advocating for the same cause, which is extremely important and touching, McFadden said.

In the book, photos of the subjects’ fathers, usually around the same age as the subjects now, were placed on the page next to the subjects’ photos. Along with the picture were their handwritten thoughts about what they think of identity and masculinity today and how they became who they are.

McFadden challenged the men to think about their perceptions of themselves and how they identify as men before and after the project.

McFadden described “Come to Selfhood” as “providing an avenue for self-healing.” Some men walked away from the project feeling that it changed their lives.

“Colorism,” another project by McFadden was introduced to the audience in the presentation. This work consists of plain headshots of African-American women without makeup or clothes on their shoulders.

The photos are not displayed in regular chromatic scale order, but mixed up to show the difference in skin tone within the same ethnicity.

“Colorism” was intended to show the hatred that racism has created within races. McFadden created a video montage to further explain this issue as well.

He used clips from talk shows like “The Tyra Banks Show” and “The Montel Williams Show” where people talked about being ashamed of their skin color or not identify as African-American.

McFadden also used footage from studies where children associated black with bad and white with good and movies where lighter skinned black people are shunned because they are believed to think they are better than darker skinned people.

He also compared music videos by Ciara, Kanye West and Lil Wayne where light skin and long, straight hair are glorified to videos by India Arie that glorify brown skin and being natural.

“I think the photos are interesting and really portray a message. The things he said in his presentation made me want to snap,” freshman business administration major Tyresha Willis said.

Alumna Phyllis Soto graduated from the University in 1969 and never really felt it necessary to come to any photo exhibit events until this one.

“I’m for equality of all races and I’m disappointed that things haven’t changed much,” Soto said.

Soto grew up in Oregon where there were very few African-American people, but saw that as a reason to become more involved with the integration of races.

Soto said she remembers Martin Luther King Jr.’s assassination and thought “What is happening to our country?”

“That is the same thing I’m thinking now for a different reason,” Soto said.

McFadden said he will continue to create work that teaches and intrigues his audience, and stay true to his purpose as a African-American man in this society.

“My job is to display what’s really going on and inspire,” McFadden said.