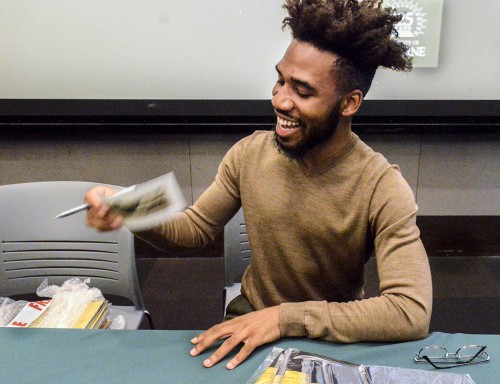 Concluding the lecture on Tuesday, photographer Joshua Rashaad McFadden autographs books and pictures in the Campus Center Ballroom before attending the gallery reception in the Carlson Gallery. McFadden began working on the portfolio, “After Selma,” in March 2015, during the 50th anniversary of the first three marches from Selma to Montgomery that influenced the Voting Rights Act of 1965. Currently, McFadden is promoting his recent publication, “Come to Selfhood,” regarding the coming-of-age experiences of young African-American men in the United States. / photo by Janelle Kluz