By Berenice Gonzalez, Jacob Whannel on October 21, 2016 in Soccer, Sports 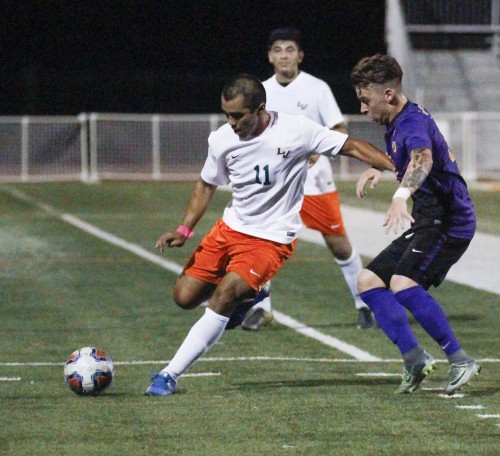 La Verne junior midfielder Javier Jasso defends the ball against Cal Lutheran junior midfielder Nico Sabbattella during the final minutes of the first half Monday at Ortmayer Stadium. The Regals scored the only goal of the game, beating the Leopards, 1-0. / photo by Berenice Gonzalez

The Leopards’ tenacity kept them alive until the final minutes and almost resulted in a goal on the last play, but the home team was unable to prevail against Cal Lutheran, falling 1-0 Monday at Ortmayer Stadium.

The loss snapped a three game win streak for La Verne, and after a victory against non-conference opponent UC Santa Cruz on Wednesday the Leopards now look to ring off four straight before post-season play begins in November.

Both teams were in stalemate early on and worked rampantly to gain scoring position while feeling each other out. At the close of the first half, the Leopards gained the momentum and had promising moves toward the goal, but could not find the angle to put anything in the net.

The second half brought a more physical tempo and both sides pushed relentlessly into each others territory, but Cal Lutheran broke the game open with a goal in the 63rd minute from junior forward Brandon Kearney.

La Verne attempted to recover and match with a score of their own in the closing minutes, but it was too little too late.

Sophomore goalkeeper Josh Ramirez held strong between the posts all night, and with only three conference games left, feels his squad is only a few defensive adjustments away from finding their groove.

“The guys did really well tonight getting in the right positions, but the volume of shots fired was a little high,” Ramirez said. “I feel that if we just tighten up a little more defensively and are able to suffocate some of those shooting lanes we’re going to be in a much better position defensively.”

On the opposite end of the pitch, senior forward Nathan Gonzalez facilitated most of the game and constantly pushed the ball deep into Cal Lutheran’s territory. Gonzalez credited his teammates’ offensive effort on the night and felt they were only one pass away from scoring on numerous occasions.

Head coach Trevor Persson said he was happy with the way his team responded to adversity being down in the final minutes of the second half, but knows they have what it takes to pull out tough wins in games like this.

“Going into our final conference games, we’re just looking to build on our strategies and tactics, and strengthen some of the areas we’ve been weak in,” Persson said.

“We’re looking to have a little team building tomorrow, and just making sure everyone is mentally and physically prepared going into these last matches.”

Rodriguez’s goal was a nicely executed rocket to consolidate his first collegiate goal.

“I lost the ball and then I got a touch on it and just volleyed it over the keeper,” he said.

“It was a big thing because I didn’t play well the previous games and it was a bump of my confidence,” Rodriguez added.

The Leopards are 10-4-1 overall and 8-4-1 in Southern California Intercollegiate Athletic Conference, remaining in second place.

Their next conference match-up will be at home against Claremont-Mudd-Scripps at 7 p.m Saturday.