By Campus Times Editorial Board, Natasha Brennan on November 18, 2016 in Editorials, Opinions 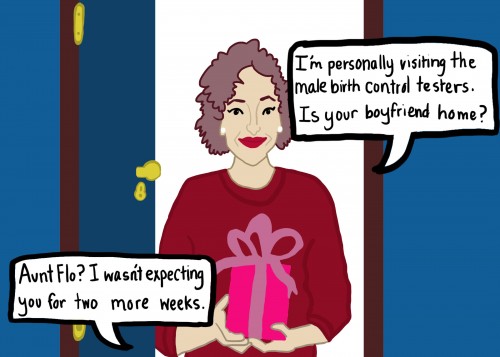 The Journal of Clinical Endocrinology and Metabolism published the results of a study for hormonal male birth control on Oct. 27. The study explained trials stopped after Stage II despite initial results showing effective results. According to the journal, trials were cut short due to side effects men were experiencing: acne, injection site pain, mood disorders and increased libido. Basically, the same side effects women experience when taking birth control.

The study required healthy men between the ages 18 to 45 with female partners ages 18 to 38. Couples could not have any known fertility problems. The goal was to temporarily lower men’s sperm count using an injection every eight weeks that contained testosterone and progestogen. The study showed to be nearly 96 percent effective out of 100 continuing users, with only four pregnancies out of 320 couples. There are various types of birth control women use that produce similar effects, but these are legally available anyway.

In the NPR Nov. 3 transcription, “Male birth control study killed after men report side effects” from the radio podcast “All Things Considered,” it was said the most common side effect was acne.

Hormonal-eluding intrauterine devices has caused acne in women. Dermatologist Joshua Zeichner, director of cosmetic and clinical research in dermatology at Mount Sinai Hospital in New York, told Allure he does not recommend such IUDs to predisposed women in an article that told the story of a beauty blogger who developed severe acne after getting an IUD.

While there is reasonable concern for side effects men were experiencing during the trials, why were side effects women deal with as a result of birth control not given the same due diligence?

The Nov. 1 CNN article, “Male birth control shot found effective, but side effects cut study short,” by Susan Scutti, stated the researchers said almost 39 percent of those symptoms men experienced were unrelated to the shots, including a death by suicide.

Scientists should continue the search for safe and effective contraception for both genders because the responsibility of safe sex should not only fall on women.