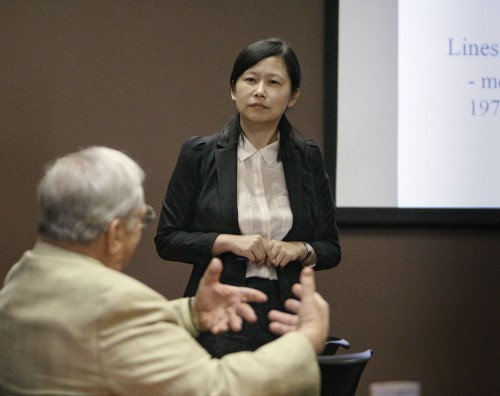 Assistant Professor of Finance Yan Hu shared her research lecture “Will Borrowers Be Penalized After a Drawdown?” to a group of roughly 20 students and faculty Tuesday in the President’s Dining Room.

Hu began her presentation by defining a line of credit as banks’ promise for future lending sold to borrowers. Then she explained fees associated with a line of credit, such as an up front fee, annual commitment fee and interest rate.

“The main purpose of my research was to compare those lines of credit issued after the drawbacks to drawbacks issued before,” Hu said.

She went on to explain the two hypothesis she had for her research. Her first hypothesis was, “All else equal a borrower is penalized a higher rate and more stringent contract terms on new lines of credit after drawdown.”

Going into her second hypothesis, Hu explained that as a borrower they know if they have drawdown, they may have some type of punishment.

Professor of Humanities Al Clark paused the lecture to ask how banks know of a borrower’s previous financial history.

“If you want to get a loan from a new bank, the new bank will definitely do research about your financial situation and take a look at what happened in the past,” Hu said.

Hu’s second hypothesis was “There is no significant difference in post drawdowns between switching and non-switching borrowers.”

She later explained that her research came from 800 random firms between 1996 and 2005. Her sources were hand-collected from 10k filings. Hu concluded with a summary of results. For her first result, she said firms are penalized after their drawdown.

Her second result was that the effectiveness of post-drawdown punishment is not tampered by the borrowers’ option to switch lead banks. The 30 minutes of lecture were matched with 30 minutes of questions and answers with audience members.

“I thought it was confusing, because I didn’t understand the terminology used,” sophomore chemistry major Amy Loebs said.

Clark explained moral hazard in relation to Hu’s research: The moral hazard is when big businesses think no country will let them fail, so they start to purchase things they want and not need to be a successful business.

“Most of you figure that if you needed some money you could go home to mom and dad,” Clark said. “The issue is that if we spend that money morally correct or not.”

The La Verne academy faculty lecture series will continue with Assistant Professor of Sociology Roy Kwon, who will present his recent research at noon Tuesday in the President’s Dining Room.

Megan Sears can be reached at megan.sears@laverne.edu.

Rounding up kindness
‘Take the A Train’