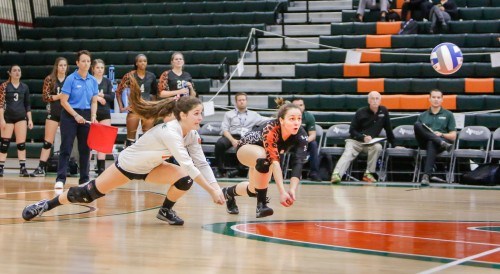 Sophomore defensive specialists Tiffany Mancuso and Sarah Yauchzee attempt to dig the ball during the fourth set of the Women’s Volleyball Championship hosted at the University of Texas at Dallas on Friday. / photo by Amanda Duvall

DALLAS – The Leopards fought hard in a close five-set game against the Southwestern Pirates, but were defeated 3-2 Friday at the University of Texas, Dallas Activity Center in the first round of the NCAA Division III Regional Championships.

After losing the first set, the Leopards won the following two and put themselves in a good position to defeat the Pirates. Southwest won the fourth set, taking the game to a fifth one where they eventually prevailed against the Leopards.

“I think that Southwestern played a great game, I think they figured out how to access the things that they needed to do to be successful,” head coach Jenna Panatier said.

“When you’re going up against a seasoned excellent coach like Don Flora you have to make sure that you are taking care of the things that you need to take care of as a team, and so we really just focused on staying focused and staying together,” she said.

La Verne started the first set strong, but watched the Pirates quickly catch up to get ahead. After the lead went in Southwestern’s favor, 14-13, the Leopards struggled to recover and lost the first set, 25-19.

On the second set, La Verne again came out strong and took the lead early, at one point reaching a 10-point advantage at 19-9. The Pirates once again started to get close, tying at 21-21 and again at 22-22, but the Leopards sealed the set win at 25-22.

The Pirates’ ability to come alive mid-set continued to make things hard for La Verne in the third set, and despite a 7-point advantage at 22-15, Southwestern put up a fight and tied the game at 22-22. They had a set point against La Verne, but the Leopards managed to win the set, 26-24.

The teams closely followed each other on the fourth set, with 11 ties and three lead changes. Despite the effort, La Verne lost the set to the Pirates, 25-21, trying the overall match score at 2-2.

A fifth set to determine the winner ended up with a 15-10 Southwestern victory.

“It was a good match,” said senior setter Tiffany Mancuso. “It was a big fight. The whole time I think I was out of breath, just running off to everything and trying to keep my team up all five games.”

Mancuso had a hitting percentage of .200, along with 10 digs and 51 assists during the game.

“I feel like we played hard, we tried to stay together the whole time, and they played a good game,” said senior middle blocker Kelsi Robinson. “We fought hard.”

Robinson had 20 kills and a hitting percentage of .333 against the Pirates in the final match of her La Verne career.

After the defeat, the Leopards finish the season with an overall record of 22-7.

“We’ve gone through a lot, and this team now has been the best experience of my four years,” Robinson said. “Being able to end it with these girls, this whole team atmosphere, means everything to us. Even though we lost, we’ve had such a good season. We played so well together, so I’m glad that when we’re leaving we can look back on this.”

Along with Mancuso and Robinson, the team graduates two other seniors: middle blocker Cassie Thompson and outside hitter Kaylee Johnson.

“It has been a long four years, my first two years I wasn’t sure how I felt about it,” Mancuso said.

“We needed to do a better job of eliminating our errors, I think is one of the things that really kind of stood out for us,” Panatier said.

“But I think the other decisive moments were when we stood up and fought for what we wanted. This is a team who fights. We’ve worked so hard to get our team culture and our team atmosphere and our family together, and I think that’s the reason that we’re here. Is because of all the work these young women have put thought. And I couldn’t be more blessed to be a part of this.” 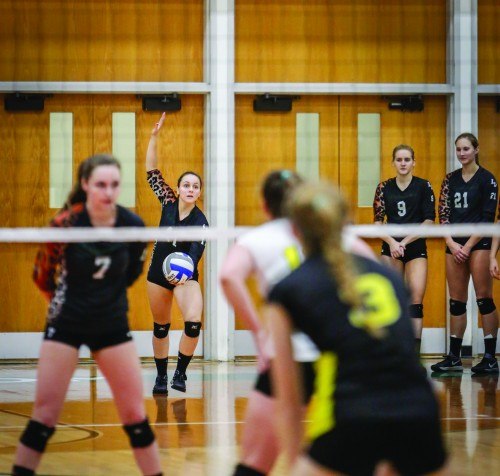 Sophomore defensive specialist and libero Sarah Yuachzee serves the ball against Southwestern during the fifth set in the NCAA Division III Women’s Volleyball Regional Championship at the University of Texas at Dallas on Friday. The Leopards were defeated in five sets, leaving the Pirates to advance to the next round. / photo by Amanda Duvall 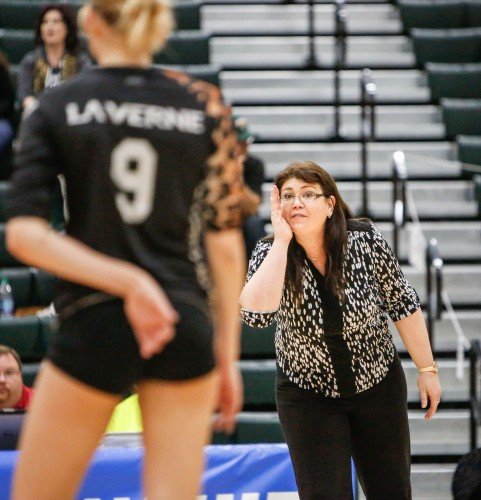 Head coach Jenna Panatier gives last minute advice to sophomore outside hitter Delaney Lynch during the third set of the Women’s Volleyball Championships at the University of Texas at Dallas’ Activity Center on Friday. / photo by Amanda Duvall 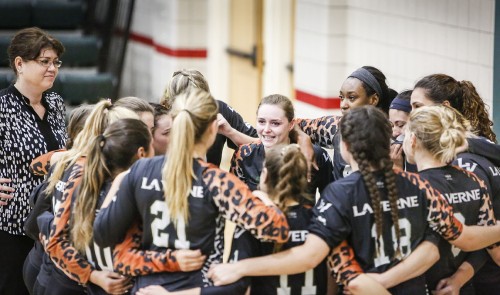 Sophomore defensive specialists Sarah Yauchzee and Kristen Sanchez attempt to dig the ball during the fourth set of the Women’s Volleyball Division III Championship Friday at the University of Texas at Dallas. / photo by Amanda Duvall