By Jacob Whannel, Taylor Bolanos on November 4, 2016 in Basketball, Sports 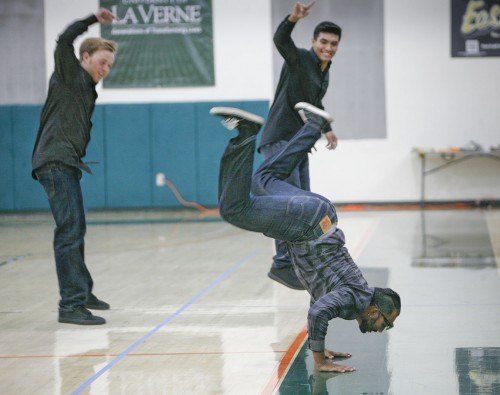 The rumbles of beaten hardwood sounded through the Tents Oct. 27 as La Verne’s men’s and women’s basketball teams hosted their annual Moonlight Madness festivities to start the season.

Students, faculty and fans packed the stands as both teams came onto the floor for a brief shoot-around to kickoff the event.

The crowd’s energy was amplified with the first player-fan contest, as a dizzy contestant dribbled through cones and had to make a shot before he or she could pass the ball onto the next contestant.

The baseball team delivered the performance of the night with an impressive Backstreet Boys routine that crowned them this year’s winner.

“The Moonlight Madness event is a great energizer for our team kicking off the season, getting the students and fans in here and knowing they’re behind us is huge,” senior guard Anthony White said.

White took the floor for his final Moonlight Madness at La Verne, and with the arrival of his final season, he feels the experience is going to pay dividends when conference play rolls around later in the season.

“Our team chemistry has grown immensely this off-season. The bonding has brought our unit much closer, and the amount of players we have returning gives us an advantage against conference teams we’ve faced year after year,” he said.

For the women’s squad, senior guard Erika Pagkalinawan praised her teammates and coaching staff for their off-season approach.

“We are constantly thinking about ways to improve our culture and getting everyone investing into a single mindset to achieve our ultimate goal,” Pagkalinawan said. “One of the biggest differences from last season to the current is the amount of time invested this off-season to improve our game.”

“Putting the work in gives us the confidence that we’ve prepared for every opponent we are going to face, and the belief that we can beat every team put in front of us,” she said.

As the festivities came to a close, senior kinesiology major Michael Medina commented on the importance of coming out to support fellow student-athletes as their season approaches.

“I think it’s great they have an event where students and fans are able to interact with the players outside of a game time setting,” Medina said. “The amount of effort and time these players put into their craft is clear on display, and I’m excited to see what both teams have in store this season.”

The men’s basketball team started its season Tuesday at Biola with a 106-57 loss.

The team travels to Southern Utah to face the Thunderbirds at 6:30 p.m. Friday.

The women’s team will square off against the Vanguard Lions at 2 p.m. Nov. 12 in an early road test.