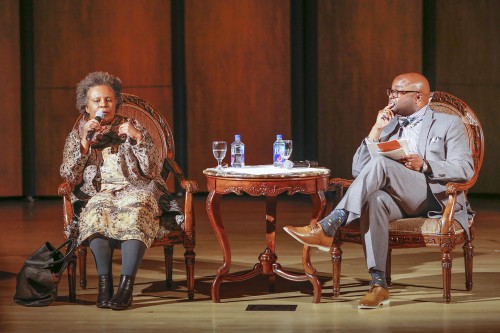 Author Claudia Rankine has an informal question and answer session with College of Arts and Sciences Dean Lawrence Potter during Rankine’s lecture Wednesday in Morgan Auditorium. Rankine offered insight into her creative process for her book “Citizen: An American Lyric,” which was the subject of this year’s One Book, One University program. / photo by Michael Savall

Claudia Rankine, author of “Citizen: An American Lyric,” spoke at the University of La Verne’s One Book, One University event, with one at 11:45 a.m. and another at 3:30 p.m., Wednesday in the Morgan Auditorium.

The lecture at 3:30 p.m. was for the entire student body, since the 11:45 a.m. lecture had been specifically for freshman FLEX students and students who are studying “Citizen” in one of their classes.

“Citizen” is a book that is divided into seven parts. Within each section Rankine alternates between personal anecdotes from herself and friend’s experiences with racism, as well as reflections on the malice of racism by using Serena Williams and Trayvon Martin as examples.

The book is written in three distinctive styles; anecdotal, essay or prose style, and poetic. “Citizen” is written in second person, which allows the anecdotes to be both personal as well as distant. The second person form, which uses ‘you’ instead of the first person ‘I,’ also allows the book to be inclusive of the reader. 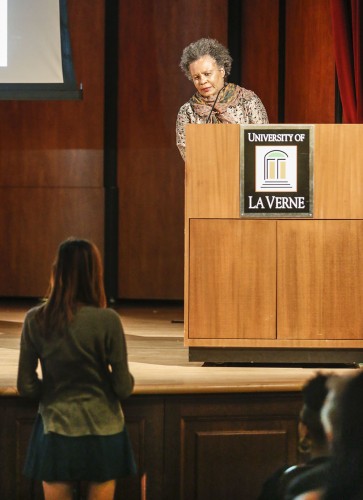 “White people believe racism has nothing to do with them, that it is not their problem,” Rankine said in the middle of her lecture.

On Oct. 27 the theater department’s “Citizen: A Staged Reading” performance gave voice to Rankine’s experiences as well as to the black people who have died at the hands of police brutality. There are several editions of the book currently in print, since the list of deaths gets updated periodically.

Dean Lawrence Potter of the College of Arts and Sciences began the lecture by giving a quick overview of the Lyceum program at La Verne, which Rankine’s lecture was a part of. He also introduced the student who had been given the opportunity to welcome Rankine to the stage.

“Anyone who knows me knows that I like to give students as much priority and privilege in these kinds of opportunities,” Potter said.

Zimanei Slocum, sophomore anthropology major and theater minor, which had been one of the performers in the staged reading of “Citizen,” gave Rankine a celebratory introduction.

Slocum said that Rankine’s book was an encouragement to her readers to “feel deeply and think freely.”

Slocum then gave the stage to Rankine, whose demeanor was representative of her tone in the text; personal yet distant. She spoke with such calm that it was impossible not to become mesmerized by her words.

Rankine’s lecture was a mixture of explanation and reading. She began with the images in the book. She then went on to read passages from the book, explain her writing process and explain where the anecdotes came from and how they materialized in “Citizen.”

“‘Citizen’ got written because I was interested in the more flagrant abuses of people of color,” Rankine said.

The cover image is an empty, black jacket, which is actually a sculpture that the artist had created in remembrance of Rodney King.

“Your relationship with that hoodie becomes your entrance into ‘Citizen,’” Rankine said.

Rankine came to a picture that depicted the body of a deer with a human face.

“The thing about the deer is that when they see people they know to be afraid,” Rankine said.

This image accompanied one of the anecdotes in her book, which describes the frightening experience of a friend who had made an appointment with a therapist who worked from home.

“When the door finally opens, the woman standing there yells, at the top of her lungs, get away from my house! What are you doing in my yard?” Rankine said.

She read the passage steadily, until she reached the dialogue. Rankine yelled the words ‘get away from my house’ with so much passion that the audience fell completely silent.

In the passage Rankine likens the therapist to a wounded dog, which made her consider what animal would best represent her friend in that moment.

“You feel like that deer, who has to be vigilant every second because you don’t know what the next minute is going to bring,” Rankine said.

In closing Rankine spoke about the book’s final scene, which was an anecdote from her own personal experience; something that actually happened to her while she was trying to decide how to end “Citizen.”

On her way to a tennis match Rankine picked up lunch at a grocery store, where she ate a banana in her car while waiting for it to get closer to her time to be at the court. A woman pulled her car into the parking space opposite of Rankine, turned off her car and then looked up. When she saw Rankine she immediately turned her car back on and drove to the other side of the lot.

As Rankine read the passage, one line stood out among the rest.

“I don’t know how to end what doesn’t have an ending,” Rankine said.

“Citizen: An American Lyric” is available on Amazon for $15. 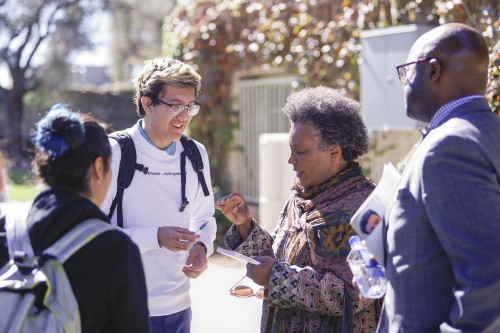 Freshman chemistry major Ren Roth gets his copy of “Citizen: An American Lyric” signed by Claudia Rankine outside Founders Hall after her lecture Wednesday in Morgan Auditorium. / photo by Michael Savall