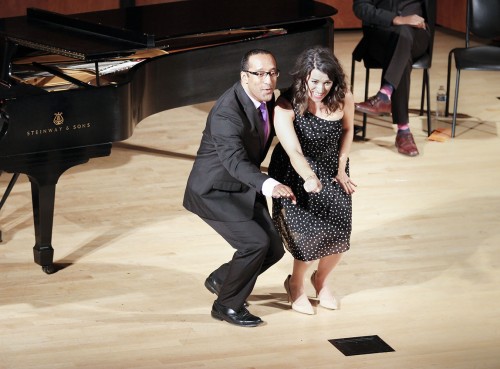 Los Angeles Opera singers LeRoy Villanueva, a baritone, and Katherine Giaquinto, a soprano, perform the Papageno/Papagena duet from “The Magic Flute,” accompanied by Tali Tadmor on piano, in Morgan Auditorium Sunday. The concert was part of the Sundays at the Morgan series. / photo by Berenice Gonzalez

Los Angeles Opera artists performed an ensemble of songs from plays and operas as part of the Lyceum series Sunday in Morgan Auditorium.

College of Arts and Sciences Dean Lawrence Potter thanked the patrons of Lyceum and Sundays at the Morgan and talked about the diversity of art showcased in Lyceum in his opening speech.

The group first performed “Libiamo ne’ lieti calici,” a brindisi in Guiseppe Verdi’s “La Traviata.” A brindisi is a drinking song performed in an opera. The song is about a man encouraged by his friends to show off his voice to a woman he loves.

Giaquinto played the character of a lovesick, manipulative young woman twice. She first performed “O Mio Babbino” from “Gianni Schicchi.” Giaquinto said the song was about a teenage girl who fell in love with a boy, only for the father to disapprove of the marriage. In retaliation, the girl threatens to throw herself into the river.

Next, Giaquinto performed “Quando Me’n Vo” from “La Boheme.” In the song, she played the character Musetta, who is the on-and-off again girlfriend of Marcello. One day, while with a man Giaquinto described as a sugar daddy, Musetta runs into Marcello. She sings in order to make him jealous and attract the attention of his friends. While Giaquinto went on singing, Van Gay and Villanueva portrayed onlookers vying for her attention.

Villanueva performed “Deh Vieni Alla Finestra” from “Don Giovanni,” in which he played a character that he described as a womanizer. He sung on stage briefly before he went offstage and toward the audience’s seats. In character, he sang to an audience member in an aisle seat before he switched his attention to another attendee. He pointed to her and put an extended pinkie and thumb to his ear and mouth, as if to say, “Call me.”

The behavior of the singers in character drew in the audience members and showed the meaning of the songs.

“Watching opera is most enjoyable when you can read the meaning of the songs not from the words, but from their acting,” said Erik Bahnson, sophomore environmental science major.

“It was electrifying,” said Patricia Tucker, director of development of the College of Arts and Sciences. “I think the emotion between the actors – they’re singers but they’re also actors – they were able to change characters really quickly.”

The ensemble concluded the performance with six English language songs. Van Gay performed “Bring Him Home” from “Les Miserables.” Villanueva sang “Johanna” from “Sweeney Todd” and “Lawd, I’m On My Way” from “Porgy and Bess.” Giaquinto sang “I’ve Got Rhythm” from “Girl Crazy.”

Not included in the program list were “I Feel Pretty” from “West Side Story” and “If I Loved You” from “Carousel.”

“It was the last three songs that really struck me because it took me back to the times I was in theater,” said David Tucker, patron of Lyceum. “Most of those songs I could relate to from the period.”