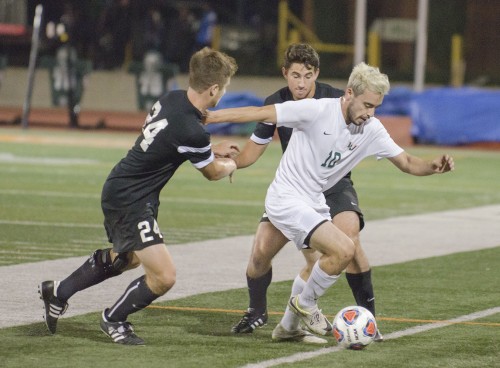 A free kick goal and a red card undid the Leopards in a tough 2-0 defeat to the Chapman Panthers in the Southern California Inter­collegiate Athletic Conference postseason tournament semifinals Nov. 3 at Ortmayer Stadium.

Beating the best defense of the league and holding one of the best attacks scoreless, the Panthers overcame the 3-3 tie and 1-0 home defeat against La Verne in their earlier season matchups to defeat them on the road to the final.

Chapman started off pressuring, dictating the rhythm of the game. Leopards’ sophomore goalkeeper Josh Ramirez was tested several times on the first half, and La Verne’s defensive unit had to hold tight to contain their advances.

The home team struggled to settle in the game and bring danger, and was held back especially in aerial duels against the Panthers’ tall team.

Meanwhile, Chapman tried to find holes in the Leopards’ defense to get to the goal.

Unable to do that, the visitors took advantage of a free kick to get ahead on the scoreboard. In the 27th minute, junior defender Elliott Braund scored from over 30 yards to crack the game and take the lead, shifting the pressure to the hosts.

Once again, La Verne improved in organization after conceding a goal. However, four minutes before the end of the first half, the Leopards went a man down when junior midfielder Auden Foxe saw a straight red.

“We started off pretty slow and they got a goal on a free kick, not even on a real play, which is the story of our season pretty much, giving goals on free kicks,” senior midfielder Justin Almandinger said.

“Even though we went down a man we fought back in the second half. I thought we put ourselves in a position to catch up, but when they got that second goal it just debilitated us,” he said.

La Verne had a more positive showing in the second half, bringing the intensity level up, knowing they only had 45 minutes to change the game’s fate and secure a place in the final.

With pressure building up, however, the nerves were another obstacle to overcome.

On the 64th minute, the Leopards had their 10-men disadvantage balanced out when goal-scorer Braund was sent off with a second yellow card.

Despite the boost in hope,the La Verne team soon had its optimism crushed again when Chapman scored on the 72nd minute.

Senior midfielder Marco Saglimbeni was persistent in rushing through the side all the way to the corner to cross a ball to the box, and senior midfielder Jake Sarmiento headed it in to increase Chapman’s lead, 2-0.

“We made too many mistakes and we didn’t capitalize on theirs,” senior defender Anton Russell said.

“At halftime we had pretty good halftime tactics, came out I thought with pretty good energy, got our chances but we didn’t capitalize on them. Once they got that second goal it was pretty much a nail in the coffin for us,” he said.

La Verne had a chance to equalize with senior midfielder Justin Funes on the following play, but the Panthers kept their score at zero.

“We had to drop more defensive, and as the game got on, as we pressed we were really risky in getting caught in behind even though we had to go get a goal,” Almandinger said.

“They’re really good at moving the ball so the challenge for us is when we get possession of the ball, making something happen,” he said.

Despite having good possession in the final minutes, La Verne was unable to get a goal and Chapman retained control until the final whistle sounded.

“They’re very dynamic with their runs, so being able to keep up with their runners at all times makes it difficult,” Russell said.

“But we gave up our goals on a set piece and a turnover so they’re very good at making you pay for your mistakes,” he said.

With the defeat, the Leopards lost a pass to the finals and the opportunity to repeat the 2015 clash against Redlands for the postseason tournament title.

The Leopards finished the season 14-5-1 overall.

“It was unfortunate, I wish we could have a different outcome,” senior defender Humberto Irra said.

“I think our challenge was within ourselves, we just had to fight it within ourselves to want it more, and it started showing in the second half. But I just wish we played those 90 minutes just like that,” he said.

La Verne graduates 10 seniors and will have to bet on rebuilding to fight again for the title next season.

Head coach Trevor Persson and his staff were named coaching staff of the year, and senior forward Saul Uribe was named SCIAC Athlete of the Year.

The Leopards also had six players named to All-SCIAC teams, a league highest.

Giovanna Z. Rinaldo can be reached at giovanna.zelonirinaldo@larvene.edu.