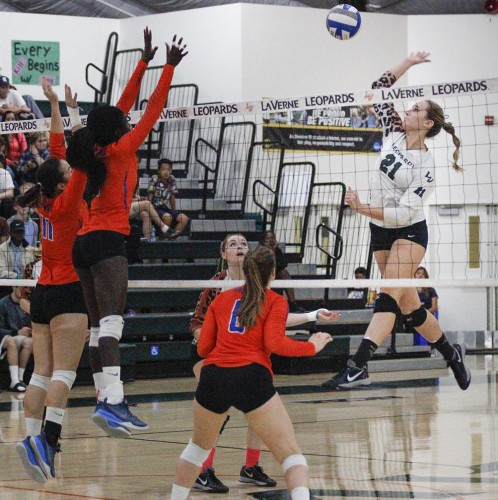 During the third set against Pomona-Pitzer, La Verne senior setter Tiffany Mancuso sets the ball for senior middle blocker Cassie Thompson, who spiked a point against the Sagehens. The Leopards plucked the visitors, 3-0, at Frantz Athletic Court on Friday. / photo by Berenice Gonzalez

In the first set against the Sagehens, both teams closely followed each other. La Verne, winning 25-18, had 15 kills compared to Pomona’s 12.

“Tonight was really fun, all of us came together,” sophomore libero Kristen Sanchez said. “It’s senior night we’re celebrating. The season has been really fun, we were all able to play our game and play really well.”

In set two, La Verne continued its success, winning 25-17. With 15 kills and two service aces by junior outside hitter Marisa Rojo, the Leopards maintained their momentum.

In the third set, the Leopards sealed the deal, winning 25-13.

As she has done for the whole season, senior middle blocker Kelsi Robinson kneeled during the national anthem. She was joined by other students in the stands who also protested the police brutality suffered by African-Americans.

Robinson said this is her way of speaking out on injustice.

“It was something that I started doing in the beginning of the season, after I saw (San Francisco 49ers Quarterback Colin) Kaepernick doing it,” Robinson said. “I realized that I am passionate about it. If this is the only way that I can get my voice out that’s what I’m going to do.”

On Saturday the Leopards also beat Caltech, 3-0, and concluded the season 22-5 overall and 13-3 in the Southern California Intercollegiate Athletic Conference.

With the victory, the Leopards ranked third in SCIAC and secured a place in the postseason tournament semifinals. They faced the Claremont-Mudd-Scripps Athenas 7 p.m. Thursday at Roberts Pavilion for the semifinal.

Robinson was named 2016 SCIAC volleyball athlete of the year, while six other players made it to All-SCIAC teams. Head coach Jenna Panatier and her staff were named coaching staff of the year.