By Campus Times Editorial Board, Natasha Brennan on December 2, 2016 in Editorials, Opinions 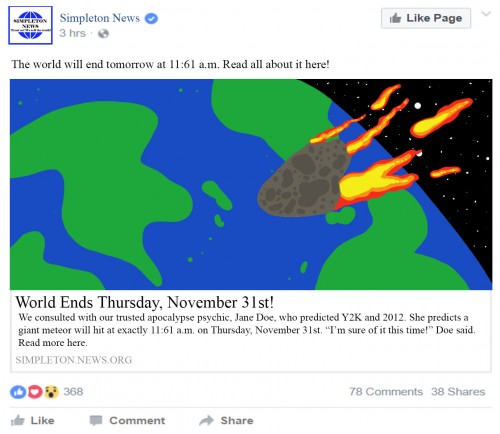 The way we consume news is changing, and in many ways has become uniform with the way we consume media in general. Social media has made the news more interactive than ever, serving as a catalyst for debate and discussions on Twitter, or as a way to instantaneously share an article with friends via Facebook, or even document and share the news we witness every day with Snapchat.

However, social media’s filter for what becomes a trending “news” story is based on algorithms, not human editors, and so the news we receive via Facebook or Twitter is often false and not fact-checked.

The algorithms used to determine what ends up on someone’s timeline do so by popularity, not accuracy. Take for example the meme of Donald Trump that was covered by a quote that said if he ran for president, he would run as a Republican because they are the dumbest group of people, which was supposedly pulled from a 1998 interview with People Magazine. However, a quick Google search reveals the quote is 100 percent fictional. According to Ishmael Daro for BuzzFeed News, People Magazine told FactCheck.org earlier this year that they searched through their own archives for the quote after the meme being attributed to their magazine first surfaced.

“We combed through every Trump story in our archive,” a spokesperson from People Magazine told Daro. “We couldn’t find anything remotely like this quote—and no interview at all in 1998.”

The reason this meme became so popular was due to the algorithms in place by social media, and in this case, Facebook. If an editorial staff were in charge of Facebook’s trending news topics, this picture would not have made it through.

However, as consumers of news and media there is a certain responsibility on us as people who live in a society dominated by the Internet, a place where anyone can slap a quote on a picture and call it true. Our responsibility is simple: just double-check. Before sharing an article we find on Facebook, we should read the whole story and fact-check it. It can be surprising how much fake news is circulating in the Internet.

It is time social media ditched the algorithms for a human editorial staff. While even though some social media outlets now reach out across the globe, their standards of functioning and operations should begin to demonstrate the best of democracy and avoid giving out fake news, even if they are not technically an official news outlet. In the most recent Washington Post-Schar School national poll, 30 percent of people reported that they get their news from the Internet and 32 percent of those respondents said they get their news from social media specifically.

Since Facebook and other social media are being treated like an official news outlet, they should rise to the standards of honesty that formal news outlets have always been dedicated to.